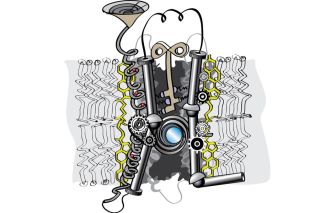 Studies are revealing GPCRs as complex machines, controlled by many inputs and producing many outputs.
(Image: © Courtesy of the GPCR Network, The Scripps Research Institute.)

GPCR — that's an abbreviation you may have heard only recently, when the 2012 Nobel Prize in chemistry recognized groundbreaking work on this important family of proteins.

These proteins, G protein-coupled receptors, control practically every bodily process. Scientists estimate that there about 800 different types in the membranes of your cells. Some are sensing molecules that let you see, smell and taste; others give you a boost after a few sips of coffee, make you retreat during a conflict or help fight off infection. GPCRs also are associated with diseases ranging from asthma to schizophrenia, and they are thetarget of more than a third of marketed drugs, including allergy and heart medications and antidepressants.

Yet GPCRs' structures — key to understanding how they work and to designing more effective drugs — have remained relatively hidden from view. Researchers funded by the National Institutes of Health have given us a peek at some of them, and the improved methods these scientists have developed could reveal lots more structures in the near future.

Labs around the world have tried for years to obtain detailed images of human GPCRs because the precise, three-dimensional arrangement of a protein's atoms provides important details about how a protein interacts with its natural partner molecules in the body or with drug molecules. But the structures of membrane proteins, including GPCRs, are as difficult to determine as they are valuable to understand.

One challenge is that GPCRs are exceedingly flimsy and fragile when not anchored within their native cell membranes. This makes it very hard to coax them to form crystals so that their structures can be determined through X-ray crystallography.

Right now, we know the structures of about 1 percent of all human GPCRs, and researchers are using two key approaches to generate and study more. Stanford University's Brian Kobilka, who shared the 2012 Nobel Prize for his work on GPCRs, is among the scientists who are focusing on specific GPCRs to better understand how they function and interact with other molecules, including drugs. Other scientists, such as Raymond Stevens at The Scripps Research Institute, are taking a complementary approach to get structures that represent each of the major branches of the GPCR family tree. Knowing more about one member could enable scientists to computationally model the others.

Here are some of the key structures that the Stevens group and its collaborators, including Kobilka and other scientists around the world, have solved using the family tree approach:

What was the game-changing technical breakthrough that has made determining these structures possible?

"I'm always asked that question," says Stevens, "and the answer is that there wasn't just one breakthrough, there were about 15 separate developments by several different investigators around the world, each breakthrough critically needed in combination with one another, and they came together after a long time."

Some of these breakthroughs have improved researchers' ability to produce and purify GPCRs in quantities sufficient for crystallization.Other breakthroughs have been aimed at stabilizing GPCRs, making them more crystallizable and holding them in a specific structural conformation. Scientists continue to improve other methods, including the ability to model new GPCR structures from known ones.

These developments have had an enormous impact on furthering our understanding of GPCRs, and they should lead to new insights on biological processes and aid progress in drug discovery.

The Structures of Life