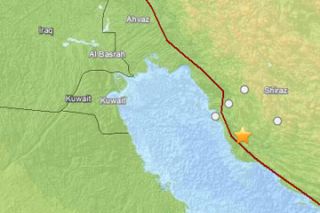 An earthquake of preliminary magnitude 6.3 struck today in southern Iran, according to the U.S. Geological Survey (USGS).

The USGS expects that significant damage and casualties are likely, and Iran's state media is already reporting that at least three people have died, according to Reuters.

Earthquakes of this size are considered major and can cause significant damage, especially with poorly built structures. Even well designed buildings can be damaged or, in some cases, destroyed depending on the severity of the quake and a building’s proximity to the epicenter. Earthquakes of this size are sometimes followed by significant aftershocks. But the damage caused by any single event depends on the quake's depth, proximity to populated areas, building standards in the region, as well as the type of earthquake. The USGS frequently updates the magnitude of an event after more data is analyzed.