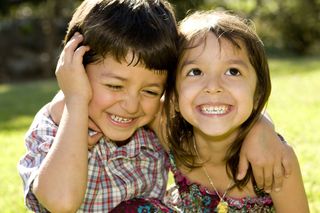 More than half a million children in the United States have elevated levels of lead in their blood, according to a new report from the Centers for Disease Control and Prevention.

Surveys done between 2007 and 2010 show that about 535,000 children ages 1 to 5, or 2.6 percent of kids in this age group, had blood lead levels equal to or above the recommended 5 micrograms per deciliter, the report says.

That's down from the 8.6 percent seen in earlier surveys done between 1999 and 2002, but disparities remain among minority groups and those from low-income families.

The idea behind the change is to identify kids with high levels earlier, so that action can be taken to reduce their lead exposure. Kids need medical treatment (called chelation therapy) for lead exposure if their blood lead levels reach 45 micrograms per deciliter, the CDC says.

Even low levels of lead in the blood have been linked with an increased risk of lower IQs and attention problems, and there is no safe level of lead exposure, the CDC says.

The higher blood lead levels seen among minority groups and low-income families can be attributed to differences in housing, nutrition and other environmental factors, the report says.

Most homes built before 1978 have lead paint that can find its way into dust, and from there, into kids' mouths. Lead in paint is the most concentrated source of lead exposure for kids, said study researcher Mary Jean Brown, of the CDC's National Center for Environmental Health. While public health efforts, such as removing lead from paint, have dramatically reduced children's exposure to lead, continued efforts to increase awareness of lead hazards can further reduce exposures, the CDC says.

If a child has a blood lead level of 5micrograms per deciliter or above, parents should speak with their doctor about possible soruces of lead in the child's enviornment that can be eliminated. It's not always easy to identify the source of lead exposure, as even small amounts of lead in dust, soil, water and old toys can add up to significant levels, Brown said. The child should be re-tested a few months later to make sure his or her blood lead levels don't continue to rise, Brown said.

Increasing iron and calcium intake can also reduce the amount of lead absorbed by the body, the CDC says.

Pass it on: About half a million kids ages 1 to 5 have elevated blood lead levels.