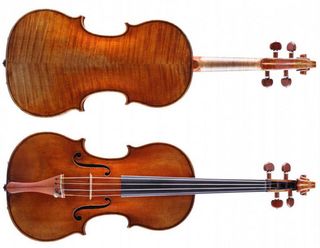 The 1704 "Betts" Stradivari violin was crafted by Antonio Stradivari, an Italian manufacturer of string instruments. Of the estimated 1,000 violins originally crafted by Stradivari, about 650 still exist. New research suggests these instruments mimic the vowel sounds of the female soprano voice.
(Image: © Radiological Society of America)

Virtuosos who describe the singing voice of a violin may be on to something. The great violin makers, such as Stradivari and Guarneri, may have designed violins to mimic the human voice, new research suggests.

Study author Joseph Nagyvary, an emeritus biochemistry professor at Texas A&M University, previously proved that the violin masters Stradivari and Guarneri del Gesù had soaked their wood in brine and borax to fight a worm infestation that swept through Italy in the 1700s. Those chemicals treatments led to the unique sounds that violin makers have struggled to reproduce.

But he had also long argued that the great violin masters were making violins with more humanlike voices than any others of the time. [25 Amazing Facts from Science]

"It has been widely held that violins 'sing' with a female soprano voice," Nagyvary said in a statement.

To test that claim, Nagyvary recorded Metropolitan opera singer Emily Pulley singing a series of vowel sounds. He then compared those sounds with a 1987 recording of virtuoso Itzhak Perlman playing a scale on a 1743 Guarneri violin.

"I analyzed her sound samples by computer for harmonic content and then using state-of-the art phonetic analysis to obtain a 2-D map of the female soprano vowels. Each note of a musical scale on the violin underwent the same analysis, and the results were plotted and mapped against the soprano vowels," Nagyvary said in a statement.

The two "voices" could be mapped on the same scale, with the violin creating several English and French vowel sounds, as well as two Italian vowel sounds.

The findings suggest that makers of Guarneri and Stradivarius violins of the 1700s were striving to imitate the human voice in their instruments. Guarneri violins now routinely sell for between $10 million and $20 million.

"For 400 years, violin prices have been based almost exclusively on the reputation of the maker — the label inside of the violin determined the price tag," Nagyvary said in a statement. "The sound quality rarely entered into price consideration, because it was deemed inaccessible. These findings could change how violins may be valued."