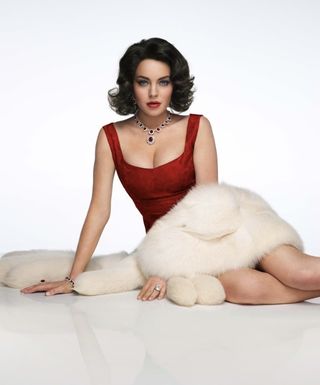 Actress Lindsay Lohan in a publicity still from the movie "Liz and Dick," a biopic of Elizabeth Taylor, another celebrity whose fame lasted years.
(Image: © © Lifetime)

Once a celebrity claws their way to the top, they're unlikely to get knocked off the pedestal, a new study finds. In fact, 96 percent of people mentioned in newspapers more than 100 times in a given year were already famous three years before.

"There is almost a consensus among scholars in the field of the sociology of fame, that most fame is ephemeral," study researcher Eran Shor of McGill University said in a statement. "What we've shown here that is truly revolutionary is that the people who you and I would consider famous, even the Kim Kardashians of this world, stay famous for a long time. It doesn't come and go."

They're not going anywhere

That's bad news to those tired of seeing reality star Kardashian or actress Lindsay Lohan plastered over every tabloid. The finding also doesn't bode well for those aiming for the spotlight: Turnover in the celebrity industry is low, the researchers report in April in the journal American Sociological Review.

Shor and his colleagues tracked names mentioned in English-language newspapers over several decades. They found that lasting fame is the norm in all areas, including sports, politics and entertainment. [17 Species Named for Celebrities]

They also found the celebrities most likely to get name-checked by entertainment sections. Between 2004 and 2009, they found that the 10 most frequent names in newspaper entertainment articles were Jamie Foxx, Bill Murray, Natalie Portman, Tommy Lee Jones, Naomi Watts, Howard Hughes, Phil Spector, John Malkovich, Adrien Brody and Steve Buscemi. All of these entertainers boast years- or decades-long careers. ("The Aviator," a movie based on the life of billionaire and movie producer Howard Hughes, came out in 2004, which might explain why Hughes' name was so common despite his death in 1976.)

Fame is self-reinforcing, the researchers wrote. A new talent or random chance might propel an individual into the spotlight, but once they're there, the media and audiences tend to devote attention to them simply because they are famous — and because competing media outlets are devoting attention to them, as well.

"Leonard Cohen is still well-known today, over 40 years after he first became famous," Van de Rijt said in a statement. "But Chesley Sullenberger, the pilot who received instant fame after safely landing a disabled plane on the Hudson, is a name that will likely be forgotten pretty quickly. What we have shown is that Leonard Cohen is the rule and Chesley Sullenberger the exception."