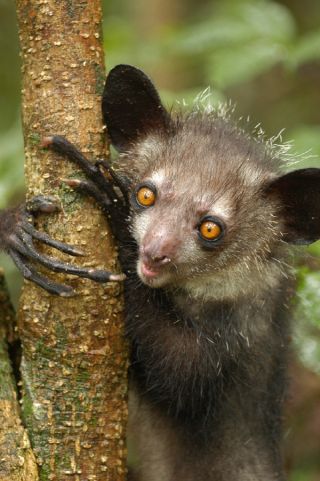 With their wide-set yellow eyes, big ears, continuously growing incisors and long, skeletal fingers, aye-ayes aren’t the cuddliest looking of the lemurs. But like many lemurs — which are unique to the island nation Madagascar — aye-ayes are in danger of becoming extinct. Using tracking collars and genetic sequencing, researchers are trying to better understand them in the hopes of protecting them. This photo shows a female aye-aye.
(Image: © Ed Louis)

With its wide-set yellow eyes, oversize ears and long, skeletal fingers, the aye-aye is not Madagascar's cuddliest-looking lemur. This elusive, nocturnal animal has joined a motley crew of rare animals, including Tasmanian devils, pygmy elephants and many others, whose complete genetic codes, or genomes, researchers have sequenced and analyzed in search of information that might help keep them on the planet.

In a study released today (March 25) by the journal Proceedings of the National Academy of Sciences, a team sequenced the genomes from 12 aye-ayes from three regions in Madagascar and compared them. They found aye-ayes from one region, in the north of the island country, were genetically distinct from those in western and eastern regions.

The results are important for conservation of the species, researchers say.

"Say something happens with this population up north, we are losing a tremendous amount of total species diversity, which puts this animal at much more risk for extinction," said Ed Louis, a study researcher and director of conservation genetics at Omaha's Henry Doorly Zoo and Aquarium. [Aye-Aye Album: Photos of a Strange-Looking Lemur]

Greater genetic diversity gives a population the means to adapt to changes over time. A lack of diversity could leave a population more vulnerability to disease or changes in its environment, for example.

Many plants and animals, including lemurs, are unique to Madagascar. However, over the years, much of the island country's forests have been destroyed, and the situation has worsened since a 2009 coup d'état. Lemurs are also increasingly hunted for meat.

While genetics has been used on a limited scale in conservation for about two decades, the process of decoding an organism's genetic sequence has become faster and cheaper in recent years. This change potentially gives researchers access to a much greater volume of information. The resulting data can, for example, reveal genetically distinct populations that may have otherwise appeared to be a single group, or bring to light the history of interbreeding between populations.

Prior to the two recent genomic studies on aye-ayes, including the PNAS study, only a comparatively minuscule amount of these animals' genetic code had been examined, according to Louis, who contributed to both genomic studies.

"We have just expanded the amount of knowledge on this particular species tremendously," he said.

There are challenges, of course. It can be difficult to get samples from scarce, shy endangered animals, such as aye-ayes. And putting together a sequence for an animal whose genome has never before been sequenced is challenging.

To help others seeking to do conservation or ecological research with genomes, the team has made their analytical tools available online at the Galaxy website.

"Conservation genomics isn't going to work very well on its own," said George Perry, an assistant professor at Pennsylvania State University, who, with Louis, led the recent aye-aye study. "We need to combine it with ecological information and behavioral data."

Some of this information has come from tracking collars Louis and colleagues have placed on aye-ayes, revealing these lemurs have large ranges, with individuals occupying as much as 1,500 acres (600 hectares).

This has direct implications for conservation plans, since a protected area must be big enough to contain an adequate number of ranges for aye-ayes.

Louis, who is also director general of the Malagasy nongovernmental organization the Madagascar Biodiversity Partnership, and colleagues have been collecting samples from other regions as well.