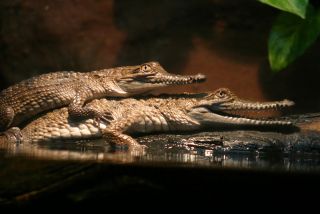 Once two consenting crocodiles are ready for business, it takes just seconds for the male to inseminate the female with his hidden penis.
(Image: © Stuart Elflett | Shutterstock)

Crocodiles are well-known for their armored skin, sharp teeth and powerful jaws, but the ancient reptiles' mating behavior is just as striking as their appearance.

The mating dance involves almost all the senses. Males begin by bellowing above water, while producing low-frequency infrasound, which humans cannot hear. "You can feel the vibrations traveling through the water and you can even see pressure waves," Britton told LiveScience.

Males may also slap their snouts on the water, blow water from their noses or perform certain arched postures. At closer ranges, they may release an oily musk, which floats on the surface of the water, to further entice the female. Though the male is leading the dance, the female is participating with her own set of auditory, visual and olfactory signals during this time. The pair is in constant communication, Britton said.

Once they meet up, they'll tenderly rub each other's snouts and backs, ride one another or blow bubbles. When the couple is ready for business — sometimes after several hours of courtship — they'll twist around each other, trying to align their cloaca (waste and reproductive orifice). Seconds after alignment, the male inseminates the female with his hidden penis.