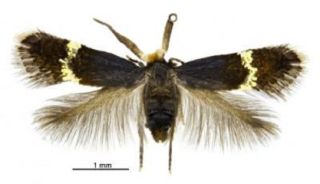 Australian pygmy moths that are well equipped for courtship are appropriately borrowing their name from the 18th century Italian philanderer and adventurer Giacomo Casanova.

Researchers say they named the newly designated subgenus "Casanovula" (within the genus Pectinivalva) because these metallic-colored species sport mustache-like patches that seem to help them lure females by spreading their scent.

These patches — which look like overlapping shells up close — can be found on their front legs, wings or abdomen and they are thought to help disperse scent from a close range during courtship of the female.

One of the group's more remarkable species is Pectinivalva (Casanovula) minotaurus­, named for the bull-headed Minotaur of Greek myths. The male of this species has two different kinds of the scent-spreading tufts on its abdomen and huge, bizarrely flattened antennae, researchers say.

The tiny moths, whose wingspan reaches only a third of an inch across (8 millimeters), belong to a family called Nepticulidae that dates back to the time of the dinosaurs, around 110 million years ago, researchers say. The Casanovula subgenus was described online this month in the journal ZooKeys.