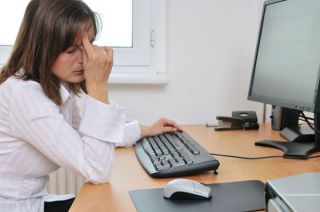 When you're stressed out, you've probably been advised to take a deep breath and relax.

Scientists now say your breath could someday reveal just how stressed out you actually are.

There are six biomarkers in breath that seem to change when a person is experiencing a high level of stress, according to a study published in the latest issue of the Journal of Breath Research.

"If we can measure stress objectively in a non-invasive way, then it may benefit patients and vulnerable people in long-term care who find it difficult to disclose stress responses to their [caretakers], such as those suffering from Alzheimer's," said study co-author Paul Thomas of Loughborough University in Leicestershire, England, in a news statement.

The researchers exposed 22 young adults to a high-pressure situation involving a difficult arithmetic test that was designed to induce stress. The same subjects also underwent a session listening to relaxing classical music in a comfortable seating arrangement.

Before and after each session, scientists measured the participants' blood pressure levels and heart rates, while also analyzing the chemical compounds in their breath using a technique known as gas chromatography-mass spectrometry.

The breath analysis revealed that two compounds, indole and 2-methyl-pentadecane, were present in significantly higher levels in the breath of participants following the stressful session. Additionally, four compounds were found in smaller amounts after the stressful test.

A number of recent studies have found that breath analysis can be used to detect the presence of certain diseases and conditions. Researchers at the University of Vermont have found that the analysis can accurately diagnose bacterial infections such as staph, according to research published in the Journal of Breath Research.

And in June of 2012, researchers unveiled a low-cost, noninvasive breathalyzer system developed at the Georgia Institute of Technology that may be able to screen for both breast cancer and lung cancer.

Even dogs have gotten into the act: A 2011 study, published in the journal Gut, suggests that dogs can be trained to detect bowel cancer, even in its early stages, just by smelling the breath or stool of a patient.

The stress analysis researchers insist that their small study would have to be repeated with a larger, more-varied sample of participants to determine the technique's accuracy.

Additionally, factors like diet, environment and exercise could alter breath-test results, and the compounds affected by stress could in turn affect other breath tests, Thomas said. "It is possible that stress markers in the breath could mask or confound other key compounds that are used to diagnose a certain disease or condition, so it is important that these are accounted for,” he said.