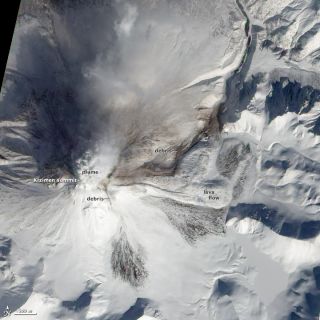 Ash, lava and debris cloak the snowy slopes of Kizimen volcano on Russia's Kamchatka Peninsula after a series of eruptions early this month.

NASA's Earth Observing-1 (EO-1) satellite spotted the eruption's aftermath on March 12. A gas plume still rose from the summit, while snow covered a lava flow on the volcano's eastern flank.

Kizimen is a stratovolcano, a 7,795-foot-tall (2,376 meters), cone-shaped mountain similar to Japan's Mt. Fuji or Washington's Mount St. Helens, before the latter's earth-shattering eruption in 1980, according to NASA's Earth Observatory. The Kamchatka Peninsula in Russia is home to 29 of the world's active volcanoes, according to the Smithsonian Institution's Global Volcanism Program.

Kizimen's eruption started in February 2011. The volcano unleashed an explosive eruption after a series of earthquake tremors that started in July 2009, indicating magma was moving underground. Ash plumes spewed about 2 miles (4 kilometers) into the atmosphere.

After two years of on-and-off activity, in January 2013, pyroclastic flows (superheated clouds of gas and volcanic debris) sped down the volcano's flanks when a lava dome collapsed at Kizimen's summit.