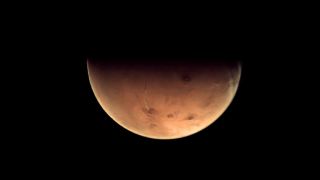 If a microorganism were found on Mars, would anyone care?

The news of even potential life made headlines, and there's no doubt the discovery of actual microbial life on Mars would, too. But the impact of finding life on another world might not be as Earth-shattering as one might think, experts say. That's mainly because the life probably wouldn't be asking to be taken to our leader.

For scientists, Mars life would be a big deal, McKay told LiveScience. Even more paradigm-altering would be to find that life on Mars originated independently.

It's plausible that Mars and Earth exchanged material in their early days, and that life found on Mars could have arisen from the same source as life on Earth. Such a discovery would be intriguing, McKay said, but "not as profound as finding that there's life on Mars and finding that it represents a second genesis."

"If we find on Mars evidence for a second genesis, that changes everything," he said. [Photos: Curiosity Finds Habitable Martian Site]

Life evolving twice in the same solar system would suggest that life is common throughout the universe, McKay explained. Such a discovery would be huge for biologists, who would suddenly have an entirely new type of biology to study.

McKay doesn't envision any major shifts in philosophy among the public in response to such a discovery, though. The discovery of microorganisms on another planet wouldn't necessarily spur the need to re-evaluate humanity's place in the universe, for example.

"I would put it along the lines of the discovery of the Higgs boson," McKay said, referring to the particle theorized to explain where other particles get their mass. "It would be that sort of level of event. It would be out in the public and people would be like, 'Oh, wow,' but mostly it would be something that scientists would get into."

Physicists announced last week they had confirmed the newfound particle discovered with experiments in the Large Hadron Collider was indeed a Higgs boson, with other physicists expressing their excitement and exhilaration of the discovery.

Indeed, some data suggests that even the discovery of intelligent extraterrestrials wouldn't shake human society beyond its ability to cope. One survey of more than 1,300 religious individuals released in 2011 found that believers were extremely confident that the discovery of intelligent aliens wouldn't shake their faith. [7 Theories on the Origin of Life]

"Theologians and religious leaders who have looked at this, it's surprising to me that they have so little to say — almost as if it's not interesting," said Ted Peters, a theologian at Pacific Lutheran Theological Seminary in Berkeley, Calif., who led the study.

Mars microbial life would be unlikely to have much of a theological impact, Peters told LiveScience. Most religious traditions hold that life is the creation of God, but don't commit to an exact explanation of how God did it. Life's origin could happen through chemistry multiple times throughout the solar system and not conflict with these worldviews, Peters said.

The discovery of intelligent life somewhere in the universe would be far more theologically significant, Peters said. Such a discovery could throw open fundamentally spiritual questions, he said: Are the aliens spiritual? Do they have a sense of morality, empathy or love?

Intelligent aliens could also provide answers about the evolution of religious belief, Peters said. Some scientists hold that religion is a primitive way of explaining the world, and that science will replace it, he said. If super-intelligent aliens were to both embrace science and God, it might disprove that evolutionary theory.

Discovering intelligent life would also be scientifically valuable, above and beyond any discovery that microbes evolved on Mars, McKay said. There are three big steps that get you to a species like humans: The origin of life, the evolution of complex life such as plants and animals, and, finally, the development of intelligence.

"We don't have any expectation that, on Mars, life did the other two steps," beyond possibly originating, McKay said. "Communicating with extraterrestrial intelligence takes us to the end of that comparison, so we immediately know that all three steps occurred."