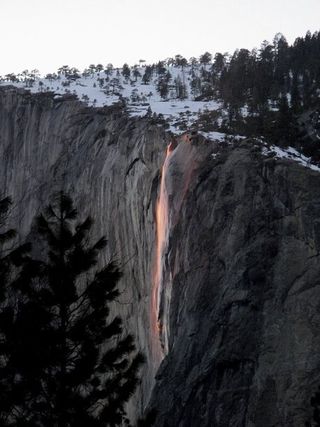 Each year from mid- to late February, Yosemite National Park's Horsetail Fall is lit up by the sun's rays when the weather is right, creating the illusion that the water flowing down is lava or fire. The phenomenon is called a 'firefall.'
(Image: © Bethany Gediman, NPS)

Last year, Yosemite National Park's famed "firefall" was more of a "firedrizzle" due to lack of snow. But this year, the "firefall" is burning bright.

Yosemite's Horsetail Fall flows like lava under a clear sky and favorable lighting. It's a small waterfall that makes big news whenever it glows orange during sunset in mid- to late February. This time of year, the sun is setting at just the right angle and the western sky is just clear enough to create the "firefall" effect. When that happens, the waterfall will glow orange for about 10 minutes.

The cult of the "firefall" has grown dramatically since outdoors photographer Galen Rowell took the first known photograph of the phenomenon in 1973. Hundreds of photographers have flocked to Yosemite this year, as they do every year now, to take pictures of the "firefall."

Horsetail Fall flows over the eastern edge of El Capitan in Yosemite Valley. The waterfall is seasonal, only flowing in the winter and early spring as the snowpack melts. The waterfall's stream splits into two, both dropping about 1,500 feet (450 meters).

The most popular place to see the "firefall" is the El Capitan picnic area, west of Yosemite Lodge and east of El Capitan, according to the park.