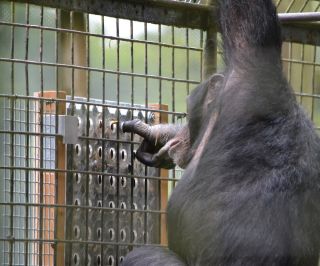 Phil the chimpanzee plays with a puzzle at the Whipsnade Zoo.
(Image: © Zoological Society of London)

Chimpanzees don't need to be rewarded for playing with brainteasers. Like humans with a crossword puzzle, they're motivated by the challenge alone, new research finds.

For the study, published today (Feb. 23) in the American Journal of Primatology, researchers followed six chimpanzees at the Zoological Society of London's Whipsnade Zoo. Three of the chimps are half-brothers (Phil, Grant and Elvis), and their family group includes another male and two females.

Zookeepers gave the chimps a homemade puzzle made of plumbing pipes. Inside the network of pipes were two red dice. The chimps had to figure out where to poke sticks into holes in the pipes to get the dice to change directions and fall into an exit chamber. The game is based on the real-world task of using sticks to pull termites out of their nests as a snack.

The chimps also got nearly identical puzzles, which held Brazil nuts instead of dice. In these versions, the prize for figuring out the puzzle was getting to eat the Brazil nuts. [Video: Chimps Outsmart Humans in Memory Game]

"We noticed that the chimps were keen to complete the puzzle regardless of whether or not they received a food reward," study researcher Fay Clark of the Zoological Society of London said in a statement. "This strongly suggests they get similar feelings of satisfaction to humans who often complete brain games for a feel-good reward."

The brainteaser was part of the zoo's voluntary enrichment activities for the chimps, which also include treats hidden in boxes and do-it-yourself materials so the chimpanzees can build their own beds every night.

Chimps have proven adept at play and games in general. In 2011, a study published in the journal Proceedings of the Royal Society B found that chimps could figure out which characters they control in a video game, exhibiting a grasp of the concept of their own agency. In the wild, chimpanzees play, too. One 2010 study found that young female chimps in Uganda carried sticks around and took them to bed, possibly playing with them as if they were dolls.