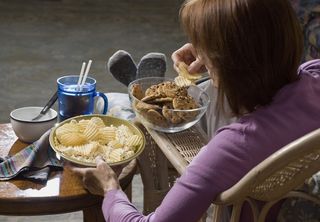 Eating that bowl of Cocoa Puffs at night may be much worse than having it in the morning. The body tends to turn more of that food into fat at night, while turning it into fuel during the day, new research suggests.

The study, published yesterday (Feb. 21) in the journal Current Biology, found that mice's ability to regulate their blood sugar varied throughout the day. In addition, disrupting their circadian clock, which signals sleep and wakefulness among other things to the body, caused them to put on more fat.

The findings could explain why night-shift workers are more prone to diabetes and obesity.

"Disrupting your biological clock leads to a disruption of metabolism such that there's more of a tendency to put on fat," even with the same amount of caloric intake or diet, said study co-author Carl Johnson, a chronobiologist at Vanderbilt University. "It's not only what you eat but when you eat it that's important."

Several studies in the past have shown that shift workers gain more weight and are likelier to develop diabetes. Past work also showed that mice (which are nocturnal) put on more fat if they can only eat during the day, even at the same caloric intake. Researchers suspected the circadian clock played a role, though exactly how was a mystery.

To find out, Johnson and his colleagues tested how well mice's bodies processed food across the 24-hour cycle. During daylight hours, when mice wouldn't normally eat, they were less reponsive to insulin, a hormone that tells the body's tissues to take sugar from the blood so it can be used as energy. (The excess sugar not used as energy gets turned into fat.)

In addition, when they disrupted the mice's circadian clocks by keeping them in dim red light all day, the mice developed signs of insulin resistance, meaning the tissues didn't respond to insulin's signal to take up sugar, and they put on more fat. Insulin resistance has also been tied to diabetes and heart disease in humans.

The findings hint that snacking late into the night may be worse for people than eating earlier in the day, Johnson said.

The study is impressive, Satchidananda Panda, a biologist at the Salk Institute in La Jolla, Calif., who was not involved in the study, wrote in an email.

"This paper for the first time conclusively shows there is a circadian rhythm in insulin sensitivity in animals and potentially in humans as well," he wrote.

Because older studies have shown that humans have daily rhythms in their blood glucose, even with constant sugar infusion, researchers already suspected that insulin sensitivity waxed and waned throughout the day, he said.