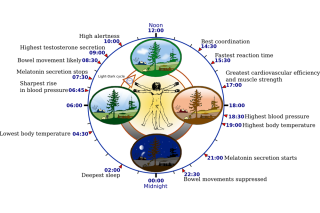 After you roll your clocks back by an hour this Sunday, you may feel a bit bleary, maybe even disoriented. That’s because your body has its own network of tiny, coordinated biological clocks. These clocks are responsible for our circadian rhythms, the roughly 24-hour cycles of physical, mental and behavioral changes that influence sleep patterns, hormone release, body temperature, hunger and more.

Researchers funded by the National Institutes of Health are identifying the genes and proteins that run biological clocks and figuring out exactly how they help keep daily rhythms in synch. This knowledge could aid the development of remedies for a range of clock-related disorders, from insomnia and jet lag to diabetes.

Scientists have long suspected that diabetes, obesity and other metabolic disorders could be linked to problems with biological clocks, and new scientific findings support this. A few years ago, researchers from the University of California, San Diego, discovered that a protein called cryptochrome helps keep the liver’s production of glucose in synch with our fasting at night and our eating during the day. More recently, they discovered that a small molecule dubbed KL001 controls cryptochrome in such a way that it can slow the liver’s biological clock and prevent excess sugar production by liver cells, particularly during fasting states. The scientists believe that KL001 could be developed into a drug and offer a new approach for treating conditions associated with abnormal blood sugar levels, like diabetes.

Sleep-related disorders affect up to 70 million adults in the United States, and insufficient sleep is linked to an increased risk for chronic diseases like high blood pressure, diabetes, depression and cancer. To better understand slumber, scientists have been searching for its genetic basis. After many attempts to find genes dedicated to controlling sleep, Rockefeller University researchers have uncovered two, called Rca1 and CycA, that appear essential to proper sleep in fruit flies, a well-established organism for studying genetics that actually has sleep patterns fairly similar to our own. Without functioning versions of the two genes, the flies had fragmented sleep, slept fewer hours than normal flies and weren’t able to function normally when awake. Many other organisms, including humans, have genes that operate just like Rca1 and CycA. The researchers believe that, by better understanding how these genes work in fruit flies, they will gain insight into how our genes control sleep.

While any change in time zone requires the body’s circadian rhythms to adjust, anecdotal and scientific evidence suggests that adjusting after west-to-east air travel takes longer. New research indicates this is because the body’s “master clock” in the brain uses different molecular mechanisms to make up for the gain or loss of time. Scientists from the University of Massachusetts Medical School and the University of Washington learned this by exposing hamsters — another organism used in sleep research — to conditions that advanced or delayed the biological clock. Travelers experience similar circadian advances flying west to east, when they lose time, and delays upon their return, when they gain time. A better molecular understanding of this phenomenon might aid the development of more effective jet lag remedies.

By figuring out how biological clocks drive sleep and wake cycles, scientists might be able to identify new molecular targets for drugs that treat sleep-related disorders. A possible new target is a potassium channel protein, which forms a tunnel through the cell’s outer membrane to regulate the transmission of electrical signals. By focusing on a clock gene that makes apotassium channelin fruit flies, scientists from New York University discovered that the gene is much more active at dusk than dawn in one biological clock: the key set of pacemaker neurons in the brain that help flies track time. When the researchers reduced expression of the gene—and, in turn, the production of the channel protein and its electrical activity—the flies displayed dawn-like behavior at dusk. And when the scientists increased gene expression, most flies lost behavioral rhythms. Because fruit fly and human clock genes function similarly, researchers expect that potassium channels may play a role in driving our circadian patterns of behavior.

Many organisms use their biological clocks to measure changes in the season. This process is especially important for plants, including the ones we harvest, because it keeps them from flowering in the dead of winter. Every day in the late afternoon, plant cells express a light-activated protein calledFKF1, which then turns on flowering mechanisms. But when the days are short and there’s less afternoon sunshine, the protein is not activated and the plants don’t flower. Researchers from the University of Washington made this finding in Arabidopsis, a simple plant often used for genetic studies. The scientists anticipate that the same processworks—and potentially could be manipulated—in more complex plants grown as crops, such as rice, wheat and barley. The investigators think their work might also be applied to understanding the way light influences egg-laying behavior by chickens and farmed fish as well as the mechanisms of seasonal affective disorder in humans.

A Light on Life’s Rhythms: Profile of Cara Altimus

How Our Bodies Keep Time