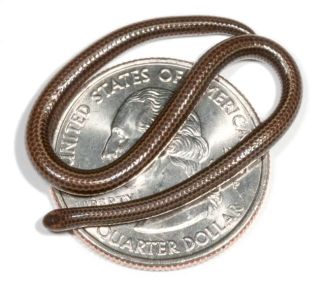 The new snake named Leptotyphlops carlae has a unique color pattern, which consists of continuous stripes from the eyes to tail-tip, with and additional pair of narrow lines along the mid-section.
(Image: © Blair Hedges, Penn State.)

As slim as a spaghetti noodle and able to fit snugly on a U.S. quarter, a new species of snake has been found hiding out in a forest on Barbados. The reptilian runt is now the world's smallest snake.

Blair Hedges, an evolutionary biologist at Penn State, discovered the snake, which just under four inches (10 cm) in length as an adult, in a fragment of forest on the eastern side of Barbados.

Hedges analyzed genetic material from the snake, which along with physical characteristics such as its unique color patterns and scales, provided evidence that the snake was indeed a new species of threadsnake, now dubbed Leptotyphlops carlae.

"Snakes may be prevented by natural selection from becoming too small because, below a certain size, there may be nothing for their young to eat," Hedges said.

The Barbados snake, like its relatives, likely feeds primarily on the larvae of ants and termites.

Like other members of the "small" club, L. carlae only produces one offspring at a time, in this case a single slender egg (some other snakes give birth to live young). In addition, its young are giants relatively speaking. In general, the hatchlings of the smallest snakes are one-half the length of an adult, while the largest snakes have hatchlings that are only one-tenth the length of an adult.

"If a tiny snake were to have two offspring, each egg could occupy only half the space that is devoted to reproduction within its body," Hedges said. "But then each of the two hatchlings would be half the normal size, perhaps too small to function as a snake or in the environment."

He added, "The fact that tiny snakes produce only one massive egg — relative to the size of the mother — suggests that natural selection is trying to keep the size of hatchlings above a critical limit in order to survive."

Hedges describes the new species in the Aug. 4 issue of the journal Zootaxa, where he also notes another new snake he discovered on the nearby island of St. Lucia. Also a type of threadsnake, the new species is just about as small as the Barbados one.

The finding doesn't surprise Hedges, who explains how unique organisms tend to be found on islands where species can evolve over time to fill the little nooks and crannies that are available as places to live, or to consume perhaps foodstuffs and other resources, unoccupied by other organisms.

The research was funded by NASA and the National Science Foundation.