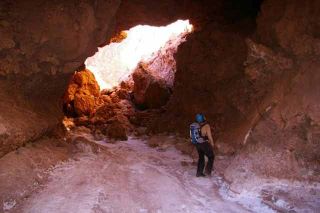 They also found hundreds of thousands of animal bones in a cave, possibly evidence of some prehistoric human activity.

The findings are preliminary and have not been analyzed.

The expedition is designed to learn how to spot caves on Mars by studying the thermal signatures of caves and non-cave features in hot, dry places here on Earth. Scientists think Martian caves, some of which may already have been spotted from space, could be good places to look for life.

No hot place on Earth is drier than the Atacama Desert. Many parts of the high-plateau desert have never received rain that anyone can remember. Average rainfall across the region is just 1 millimeter per year. (Parts of Antarctica are considered the driest places on Earth, however.)

So nobody was looking for water.

The research team was exploring Cueva Chulacao, the largest known cave in the Cordillera de la Sal. Naturally curious, they took note of things they saw while conducting their primary research. Other than a single black hair that was likely from an indigenous person, this cave was pristine, virgin territory, explained J. Judson Wynne, a cave expert with the SETI Institute and Northern Arizona University.

"There were no footprints where we were going, and I only saw the slightest evidence of human use," Wynne told LiveScience by email Monday night as the day's work was sinking in.

Wynne and his colleagues moved carefully through the cave to place a sensor along the wall, part of their NASA-funded research.

There is no known source of water nearby.

The finding may prove exciting for scientists searching for water on Mars. Water is considered a prerequisite for life as we know it.

"In arguably the driest desert in the world, we’ve found water in a cave far away from any known water source," Wynne said. "Essentially, we found water in a barren area below the Earth’s surface. Why was water there? What are the mechanisms for the presence of water in these hyper-arid caves? Is this merely a phenomenon related to these caves in particular? Is there some sort of moisture sink that results in the water concentrating in certain caves and not others in the Atacama Desert?"

Another discovery yesterday left the researchers just shaking their heads.

In a different cave in the same region, they found animal remains. Lots of them.

"We found hundreds of thousands of bones and skulls eroding out of the cave walls," Wynne wrote in his blog. "So, we’ve renamed this small cave Cuevita de Huesos (or Small Cave of the Bones)."

The researchers had to climb about 13 feet up to find a walkable passage.

"This is where we found all the bones mixed in with tree branches," Wynne wrote.

It's not clear if the animals were dumped into the cave by prehistoric people or if perhaps they were trapped by a flood. After all, the expedition is related to figuring out the thermal signatures of Mars caves, and the finding was made just this week.

"Whatever the mechanism for their deposition, this find was incredibly cool and rather exhilarating," Wynne said. Pete [Polsgrove] and I had a blast marveling over the extent of this deposition as well as discussing what could have possibly led to the deposition of these bones. Once the sensors were deployed in this feature we moved on."

The research is funded by NASA's exobiology program.

That means figuring out what caves look like in infrared, and what time of day the heat signatures of caves and surrounding features is optimal for cave hunting from, say, a craft orbiting Mars. The air around a cave entrance can be cooler or warmer than what is being radiated off sunlit rocks.

“Martian caves have already been detected through techniques developed by this project, and are significant as a potential habitat for microorganisms and other extremophiles that might exist or have existed on Mars,” Ruby said in a statement prior to departure earlier this month. “They may also serve as future habitats for astronaut explorers to the red planet, as they offer protection from radiation and the harsh environment of the surface.”

The work will continue in various visits through 2010, and a similar program will be conducted in the Mojave Desert in California.