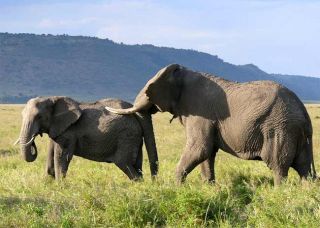 Though there are more evolutionary pros than cons to being big, large animals such as elephants face a greater risk of extinction.
(Image: © stock.xchng)

It's not easy being small, and it turns out for mammals there are more evolutionary pros than cons to being big, with species tending to develop larger body sizes over time.

Aaron Clauset of the Santa Fe Institute and Douglas Erwin of the National Museum of Natural History in Washington, D.C., created the most accurate computer model yet to predict how mammal species' body sizes change over time. Using fossil data from up to 60 million years ago to specify the form of the model, they were able to accurately reproduce the distribution of 4,000 known mammal body sizes in the last 50,000 years. Crucially, their model assumes that that when a new species appears, its size, on average, is slightly larger than its ancestor species.

So why aren't all mammals the size of elephants by now?

Because there's an opposing force at work, Clauset said. While evolution favors larger creatures, extinction seems to favor the small. The larger a species' body size, the more likely the species is to go extinct.

"The tendency for evolution to create larger species is counter-balanced by the tendency of extinction to kill them off," Clauset told LiveScience. "The distribution of sizes over time is stabilized because these processes balance out."

The model confirms an idea put forth more than 100 years ago. Though this study only pertained to mammal species, the researchers think this effect is true for most types of animals.

There are a number of pluses a larger body size might give a species.

Perhaps being bigger allows animals to more easily escape predators — the larger a creature is, the more difficult for an attacker to overpower it.

And being bigger allows a buffer if resources become scarce, because a larger body can store up more reserves. For example, a human can go a few days without eating, but a tiny shrew would starve much sooner.

Another plus of larger size is the ability to travel farther, and thus cover a wider range to search for resources.

Finally, bigger bodies are better heat retainers, because it takes longer for precious heat to travel from an animal's core to its extremities and dissipate. So being sizable protects against freezing.

Being hefty also comes with its disadvantages, though.

In general, a larger animal has more needs — it must eat more food and water to sustain its increased mass, and it usually requires a lager habitat to gather these resources.

And a smaller body size can also be a boon when hiding from predators.

And in some particular cases, being small is so much of a plus that the balance tips the other way and evolution favors the tiny.

For example, birds evolved from dinosaurs, which were bigger on average.

"The common ancestor to birds is Archaeopteryx, which was about half a meter in length," Clauset said. "Most of its descendants, however, are much smaller, perhaps because it's easier to fly when you aren't very big."

There are many details about the forces driving these trends that scientists still have to work out.

"What's interesting is we really don't understand fundamentally why some of these factors dominate in some situations, but not in others," Clauset said. "Fortunately, our model shows that together they have a relatively straightforward effect on the number of species sizes of one size or another."

The suggestion that species grow in girth over time is not new — as far back as the 19th century paleontologist and anatomist Edward Cope described seeing this trend, and the possible trend later became called Cope's Rule.

But the new model is the first to show how Cope's rule fits in with other evolutionary processes for mammals.

"What's novel about our work is that we combine many of previous ideas about the evolution of species' body sizes into a single quantitative framework that can be directly tested with empirical data," Clauset said. "In the past, theoretical work has connected with data only qualitatively."

The researchers' model takes into account both the evolutionary drift toward larger body size, the extinction bias against larger bodies, and the fact that there seems to be a minimum mammalian body size to begin with: no mammal species can seem to exist below about 2 grams (0.07 ounces). This is the size of the smallest known mammals — the bumblebee bat and the Etruscan shrew — who have some the highest metabolic rates among mammals.