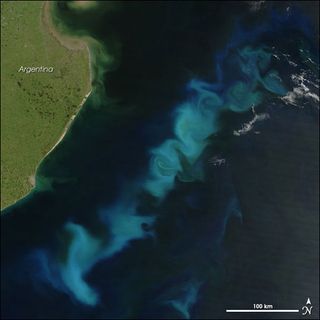 The discovery of new viruses that appear to be spread around the world's oceans hints at a war waging between such viruses and their prey: an abundant group of bacteria.

The bacteria, collectively known as SAR11, are the most abundant organisms known to inhabit seawater.

"They are everywhere, from the surface down to the bottom, from pole to pole," said study researcher Stephen Giovannoni, a professor of microbiology at Oregon State University, adding that SAR11 microbes are most abundant in the warm waters of ocean gyres, or rotating currents, where they can account for as much as 40 percent of plankton cells.

In 1990, Giovannoni's lab first identified these microbes using DNA (the genetic code deoxyribonucleic acid) found in water collected near Bermuda in the Sargasso Sea. Microbes in this group were later identified in waters around the world. [Image Gallery: Lost in the Bermuda Triangle]

More recently, using samples collected from the Sargasso Sea as well as from coastal Oregon waters, Giovannoni's team identified the four new viruses, which, the team found, killed SAR11 cells in laboratory experiments. They dubbed the viruses "pelagiphages," because they infect bacteria in the open ocean.

The team sequenced the genomes of these pelagiphages and compared these with DNA from other viruses. They found similarities between the pelagiphages and viruses that attack other ocean-dwelling bacteria. One of the new viruses, however, was so new that it created a new group, called a subfamily, of so-called podoviruses.

To get an idea of the geographic spread of these pelagiphages and their close relatives, the researchers compared their sequences with viral genetic material contained in samples from the Pacific Ocean and elsewhere.

Their results indicate these are the most abundant marine viruses seen so far, Giovannoni told LiveScience.

The discovery offers clues to SAR11's success. While some had speculated that the abundance of SAR11 microbes resulted from the bacteria's ability to evade predators such as viruses, Giovannoni and colleagues have suggested the microbes' key talent was their ability to grow by converting organic carbon molecules —dissolved, brothlike, in seawater — into carbon dioxide. (SAR11 microbes are thought to play an important role in the planet's carbon cycle.)

The discovery of abundant viruses that prey upon SAR11 supports the latter theory about the bacteria's success, Giovannoni said.

"They can be killed by the viruses, but they are still successful, because they are always growing," he said.

Viruses and their hosts often engage in an evolutionary arms race. In a paper published online on Thursday (Feb. 14) by the journal Nature, Giovannoni and colleagues suggest the abundance of SAR11 cells may give them an advantage by making it easier for them to share helpful DNA with each other, a common bacterial strategy. This genetic exchange enables the bacteria to adapt to the viruses, which must then adapt their counterattack.

The value of old-school technique

Giovannoni noted that the team had used a combination of genomic analysis and traditional lab techniques for this research.

As the cost of generating genetic sequence data drops, researchers are turning to this technology more and more. However, old-fashioned lab work, testing viruses isolated from seawater in cultures of SAR11 cells, was a crucial part of this research, he said.

While genomic analysis — which looks at an organism's genetic blueprint or genome — is a powerful tool, it has limitations, Giovannoni pointed out. One of the viruses was so new to science that its DNA sequence could not be identified by the most widely used methods of DNA analysis; only a new and particularly powerful analysis tool allowed researchers to recognize genes it contained that were distantly related to those from other viruses, he told LiveScience.