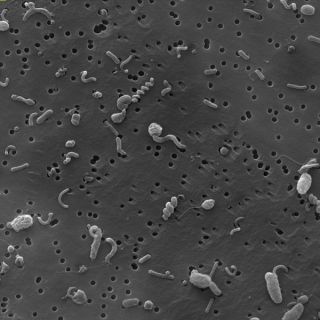 An electron microscope image of a bacterial community, on a filter. These microbes were collected 820 feet (250 meters) below the Sargasso Sea near Bermuda.
(Image: © Yanlin Zhao, Oregon State University)

The tiny microbes that fill the oceans, some of which color the surface waters green, are big players in the planet's carbon budget, both sucking up and releasing the greenhouse gas carbon dioxide.

Now, scientists are making headway in figuring out how the marine microbes will be impacted by a warming world.

A big question they're trying to answer: How could warmer seas affect the amount carbon the microbes' tuck away into the ocean? The answer may figure into forecasting the future climate.

Records from a few sites now offer a glimpse into how things might play out. And, with the help of new techniques that allow researchers to look at marine microbes' genetic blueprints, or genomes, we are learning more about the microbes themselves. The challenge is putting all of this information together, according to Stephen Giovannoni, a professor of microbiology at Oregon State University and one of the authors of a review article on the subject published in Friday's (Feb. 10) issue of the journal Science.

"We really need to know what is going on in the oceans, because they are really one of the big buffers that are absorbing carbon dioxide that is anthropogenically produced," Giovannoni said, referring to the greenhouse gases released by human activities and the resulting global warming.

The types of microbes present, both the phytoplankton and the recyclers, affects how much carbon gets tucked away versus returned to the atmosphere. For instance, heavier diatoms — single-celled algae with glass walls — sink more rapidly, thus tucking more carbon away.

"This is the part we don't understand as well as we need to. It's complicated," Giovannoni wrote in an email to LiveScience.

Data on how seasonal fluctuations — which, not surprisingly, become more prominent farther from the equator — affect which microbes show up where is not easy to come by.

"You have to go back to the same site in the oceans over and over again, and that's a very difficult and expensive proposition," he said.

A site near Bermuda, where long-term data is available, shows a pronounced spring bloom, with producers dominating during the winter and spring and two stratified communities dominated by cyanobacteria (also known as blue-green algae) in the summer and early fall. A site in Hawaii, meanwhile, showed less seasonal change and less pronounced blooms of phytoplankton, with more stable communities throughout the year.

Day length and weather are responsible for the difference between the two sites, according to Giovannoni. Part of this is because Bermuda's position farther north means its waters cool more in winter, promoting mixing that brings nutrients to the surface to feed the phytoplankton. [Stirring up a Bloom]

Meanwhile, warmer water is more stable, and less prone to mixing. This inhibits nutrients from getting pulled up to the surface, and so also inhibits algae blooms.

Climate change is expected to increase sea surface temperatures, but it's not clear what this will mean for the microbes and the carbon they recycle or tuck away. As of yet, scientists don't understand the recyclers very well or their interactions with the phytoplankton, according to Giovannoni.

"How much is this new knowledge going to affect predictions we make? The jury is out. But there is no doubt there is very rapid progress being made in understanding the details," he said.

He and Kevin Vergin, also a microbiologist at Oregon State University and the other author of the review, recommend the development of automated instrumentation to monitor changes in marine microbial communities at the same locations over long periods of time. They also call for scientists to settle on a standardized way to assess microbial diversity.

Editor's Note: This article was updated at 2:28 Eastern Standard Time on Feb. 9 to correct a reference to the colors phytoplankton imbue on the surface of the ocean.