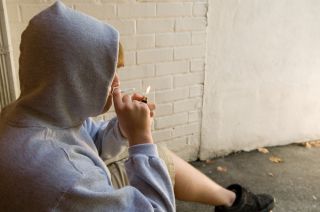 Synthetic cannabis appears to be a popular drug among soldiers.
(Image: © ejwhite | Shutterstock)

Synthetic marijuana is cheap, readily available at convenience stores nationwide, and is leaving a trail of dead and severely injured teenagers in its wake, making it one of the most alarming new drugs available anywhere, according to medical experts and drug enforcement officials.

Emily Bauer, a high-school sophomore from Cypress, Texas, reportedly had violent outbursts, urinated on herself, and showed psychotic behaviors, after smoking some synthetic marijuana last December, according to CNN.com. Soon after, she was rushed to the emergency room at Northwest Cypress Hospital near Houston.

The following day, Emily was still behaving violently and injuring herself, according to the Daily Mail. Doctors decided to put the teenager in a medically induced coma to run tests on Emily's brain. That's when they discovered she had severe vasculitis — inflamed blood vessels in her head that had constricted, cutting off the supply of oxygen to her brain.

And when Emily's blood vessels started expanding again, they greatly increased the pressure on her brain, forcing surgeons to cut a hole in the teenager's skull and insert a tube to drain excess fluids and relieve the pressure.

Subsequent brain images showed the extent of damage the girl had suffered. "We met with [the] neurology team who showed us Emily's brain images," her mother, Tonya Bauer, said on a Facebook page, according to CNN. "They told us that all white areas on [the] images were dead. It looked to us at least 70 percent of the images were white." [3 New Dangerous Drug Habits in Teens]

Synthetic marijuana is often sold as incense or potpourri, and can be branded with names like K2, Spice, Kush or Klimax, the Daily Mail reports. The substance is a mixture of various herbs, sprayed with an assortment of chemicals whose effects purportedly mimic the high from regular marijuana when smoked.

It was declared illegal in July 2012 after President Barack Obama signed legislation that banned five of the chemicals commonly used to make synthetic marijuana and bath salts, another dangerous drug concoction, CNN reports.

But manufacturers have evaded the ban by using different chemicals in their mixture, which adds to the dangers inherent in the drug: From one manufacturer to the next, and from week to week, doctors and drug-enforcement officials aren't sure what's in the stuff.

"It's really just an unknown. You don't know what you are going to get with every batch that you buy, and for that it can be extremely dangerous," an Oakland, Calif., undercover police officer told KTVU.com.

An additional concern is that synthetic marijuana use can't be detected by urine tests, partly because the chemicals used in the drug change regularly.

"You're hearing some pretty bad things with the synthetic cannabinoids — part of that has to do with the potency," U.S. Drug Enforcement Administration spokeswoman Barbara Carreno told CNN. "It can be 100 times more potent than marijuana."

And it's growing in popularity: One in every nine high school seniors admitted to having used synthetic marijuana in 2011, according to a University of Michigan survey — even though the substance was linked to more than 11,000 emergency-room visits in 2010. About one-third of those ER visits involved teens between ages 12 and 17.

You might not think marijuana and quizzes go together, but on the assumption that you arrived at this quiz sober, we pose some serious questions that will require your utmost attention and critical thinking skills. Good luck.

'I thought my son was dying'

When Sidney Washington's mother came to pick him up from an after-school program in Oakland, Calif., earlier this year, she found her 16-year-old son lying lifeless on the sidewalk, KTVU reports.

"I thought my son was dying. I thought that that was my last moment with him. I thought it was over," Latoya Washington told KTVU. Sidney recovered, but he's luckier than some users.

Emily, the Texas teenager, is now blind and partially paralyzed, though intensive therapy seems to be helping: She recently started moving her arms and legs again, and can once again eat solid food, the Daily Mail reports. But because of the extent of brain damage Emily suffered, doctors are unsure of how much Emily, now 17, can expect to recover.

Her parents have started a group called Synthetic Awareness For Emily (SAFE) to raise awareness of the dangers of synthetic marijuana.