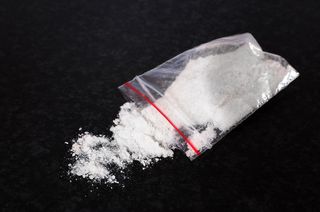 Recreational drugs called bath salts, which have gained popularity recently and have been in the news for their bizarre effects on users, have the potential for abuse and addiction, similar to that of cocaine.

Bath salts, which, despite their name, have no use in the tub, are different variations of the compound called cathinone, an alkaloid that comes from the khat plant. Currently, 42 U.S. states have laws banning many substituted cathinones. Mephedrone is one of the most common derivatives of cathinone and was listed federally in October 2011 on Schedule 1 of the Controlled Substances Act for one year, pending further study. Then on July 9, 2012, President Barack Obama signed a law placing bath salts containing mephedrone or the stimulant MDPV onto the controlled substances list.

The drugs can cause a laundry list of body and mind changes, including dizziness, delusions, paranoia, suicidal thoughts, seizures, nausea, vomiting and even death.

In the study, Malanga and his colleagues trained mice to spin a wheel to receive a reward. In this case, the reward was direct stimulation of a brain circuit involved in reward perception. The electrical stimulation came from electrodes implanted into the mice's brains.

"These are tiny, tiny currents at the very tip of a tiny, tiny electrode, delivering the current to very specific and discrete brain circuits," said Dr. C.J. Malanga, an associate professor of neurology, pediatrics and psychology at the University of North Carolina School of Medicine.

Called intracranial self-stimulation, the method has been used since the 1950s to look at whether drugs activate reward areas of the brain. The thinking goes that when the electrical stimulation is intense enough for the mice to perceive it as rewarding, these mice will work hard to spin the wheel and get more of that reward. "If you let them, an animal will work to deliver self-stimulation to the exclusion of everything else — it won't eat, it won't sleep," Malanga told LiveScience. [10 Easy Paths to Self Destruction]

During the study, the researchers measured wheel-spinning effort before, during and after the implanted mice received various doses of either mephedrone or cocaine.

"All drugs of abuse, regardless of how they act in the brain — heroin, morphine, cocaine amphetamine, alcohol, do the same thing to ICSS, they increase its rewarding value," Malanga said. So for a lower electrical stimulation, one that wasn't considered rewarding previously, the mice drugged with cocaine, say, would then be willing to spin the wheel.

It turned out that mephedrone had the same reward potency as cocaine, causing the mice to work for the reward at lower stimulations.

The study results, published online June 21 in the journal Behavioural Brain Research, suggest mephedrone and similar drugs have significant addiction potential, supporting the recent ban on the sale of bath salts in the United States, signed on July 9, Malanga said.