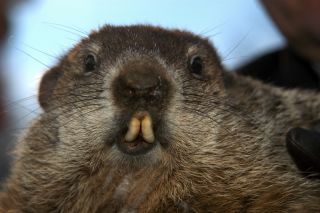 From the perch of "Gobbler's Knob," a local hillside in Punxsutawney, Penn., a famous, roly-poly rodent named Phil has predicted an early spring, or put another way, the groundhog did not see his shadow today (Feb. 2), Groundhog Day.

Every year, the Punxsutawney Groundhog Club rises early with their charge and takes Phil the groundhog, a rodent that usually lives in an enclosure in the Punxsutawney Memorial Library, to Gobbler's Knob for the weather-prediction ceremony. This year is Phil's 127th prognostication.

"Punxsutawney Phil, the King of the Groundhogs, Seer of Seers, Prognosticator of Prognosticators, Weather Prophet without Peer, was awakened from his borrow at 7:28 a.m. with a tap of the President's cane," announced the Groundhog Club. The statement went on to say, "And so ye faithful, there is no shadow to see an early Spring for you and me.

Legend has it if Punxsutawney Phil sees his shadow, six more weeks of winter weather are in store; if he doesn't see a shadow, spring is around the corner.

How much stock should we put into Phil's forecast? His handlers say the furball makes accurate predictions 100 percent of the time. Statistics tell a slightly different story: According to the Groundhog Club's records, Phil has predicted about 99 long winters and 15 early springs, with nine years of records lost. Those predictions have been right only 39 percent of the time — 36 percent if you look at post-1969 predictions, when weather records are more accurate.

"He sees his shadow about 80 percent of the time and the other 20 percent he doesn't," Bill Deeley, who was one of Phil's handlers, taking care of the groundhog for about 16 years, told LiveScience in 2010. "He's pretty darn accurate," said Deeley, who is now president of the Groundhog Club's Inner Circle. The president is responsible for translating Phil's proclamation of whether or not he saw his shadow.

So how did Phil become such a prestigious prognosticator?

The legend of the groundhog's forecasting powers arguably dates back to the early days of Christianity in Europe when clear skies on the holiday Candlemas Day, celebrated on Feb. 2, meant an extended winter. The tradition was then brought to Germany, with the German twist being that if the sun made an appearance on Candlemas, a hedgehog would cast its shadow, thus predicting six more weeks of bad weather. More specifically, the legend states: "For as the sun shines on Candlemas Day, so far will the snow swirl in May ..."

As some of Pennsylvania's earliest settlers were German, they continued the tradition upon noticing a large population of groundhogs, which resemble the European hedgehog.

Phil's kin in the wild are likely still snoozing. For these groundhogs, hibernation generally begins in October and ends in March or April (not on Feb. 2). During this deep sleep, groundhogs curl up into tight balls with their heads tucked between their hind legs. Their heartbeats slow from some 100 beats a minute to as few as 15; the body temperature drops from 95 degrees Fahrenheit (35 degrees Celsius) to 46 degrees Fahrenheit (8 degrees C); and breathing slows. This depressed state allows animals to conserve energy and live off their fat stores during the harsh winter months when food is scarce. [Sleep Tight! Photos of Snoozing Animals]

Even though pampered Phil doesn't go into a deep sleep like his outdoor pals, the groundhog does begin to slow down on eating and activities as the days get shorter. "Our groundhog will eat 12 months out of the year," Deeley said in 2010. "He's like an eating machine from April until September 15," before he starts to slow down.