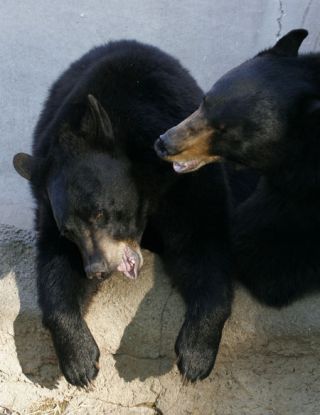 WASHINGTON—Stretch. Yawn. Ahhh. Black bears are just waking up from their winter snooze and have peeped out of their dens. And they are surprisingly fit.

Bears conk out for up to seven months during the Wisconsin winters, a snooze that would turn a human's muscles into Jell-O. But when nature's alarm clock signals it's time to awaken from hibernation, black bears have just as much muscle mass as when they tucked themselves in for the deep slumber, a new study finds.

The results were presented here this week at a meeting of the American Physiological Society as part of the annual Experimental Biology meeting.

The discovery could ultimately help astronauts and the bed-ridden maintain their skeletal muscles. In fact, the research was initially spurred by astronauts who had trouble recovering after a trip to space.

“Astronauts would come down from being in space, and they would complain of soreness in their muscles,” said Jonathan Van Dyke of the Medical College of Wisconsin in Milwaukee. “They couldn’t run as well. It would take a significant amount of time for them to get back into shape they would say.”

Van Dyke and his colleagues, including his advisor Danny Riley, also of the Medical College of Wisconsin, took samples of fat, muscle and blood from black bears in Wisconsin before and during hibernation. The scientists sampled the soleus muscle, one of the two main calf muscles, which holds a large proportion of weight when bears and humans are standing.

They studied 10 bears during the active summer months and 12 bears four to five months into their winter slumber, a process that required Wisconsin Department of Natural Resources experts and a team of veterinarians.

The team found that the muscle mass of napping bears pretty much matched that of the summer bears. The muscles also had the same amounts of slow-twitch and fast-twitch fibers, another feature that sets bears apart from people. In humans, quick-burst muscles require no oxygen for energy, so “when you aren’t using your muscles as much they tend to switch more toward a population that’s fast as opposed to being slow,” Van Dyke said. Muscle power

As for astronauts, related research also presented at the meeting showed that, compared with pre-liftoff muscle mass, nine crew members aboard the International Space Station for six months had lost more than 20 percent of their muscle mass in the soleus.

“Once you lay down or become 'unloaded' there's no activity or little activity in that [soleus] muscle,” said Janelle Romatowski, part of the team from Marquette University completing the astronaut studies.

It is already well known that astronauts lose bone mass during spaceflight.

Van Dyke now is looking for chemicals in bears that signal the body to stop muscles from shrinking, sort of like a “survival signal for the muscle cells,” he said.

He added, “It offers many possibilities for therapeutic applications for patients who are chronically confined to bed, who may be comatose or who may be immobilized in a cast, and also for astronauts in microgravity.”