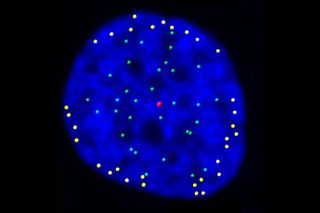 Just as images of galaxies reveal new details about space, this image of a nucleus reveals new details about the cell. The green and yellow dots mark the position of telomeres, caps on the ends of each chromosome. Until recently, scientists thought that the main job of telomeres was to keep chromosomes from fraying. New research that shows telomeres moving to the outer edge of the nucleus suggests that these caps also may play a role in organizing DNA after cells divide.

Telomeres are repeats of the same sequence of DNA building blocks. In people, telomeres consist of the sequence TTAGGG repeated approximately 2,000 times. An enzyme called telomerase adds more of the TTAGGG sequence to chromosome ends, helping the telomeres maintain their length. This is important in a growing fetus, for example, where cells are dividing rapidly.

Most adult body cells, however, keep telomerase tightly controlled and not very active. As this happens, telomeres eventually shorten. When they have shrunk to a certain length, the cells can go into retirement and stop dividing. Cancer cells, on the other hand, often increase their levels of telomerase so they can divide indefinitely.

Wanting to better understand the role of telomeres during cell division and other parts of the cell cycle, researchers at the Salk Institute for Biological Studies tracked telomere movement in real-time. They labeled telomeres in living human cells with molecules that glowed and then used advanced time-lapse live-cell microscopy to follow the movement for at least 20 hours. The results showed that telomeres move to the periphery of the cell's nucleus following cell division. Two proteins seem to tether the telomeres there.

While the implications of this spatial relocation are not yet clear, the researchers suspect that the repositioned telomeres may serve as anchor points for reorganizing chromosomes and regulating gene expression after cells have duplicated. They also hypothesize that the process might play a role in maintaining telomeres. The scientists plan to explore these possibilities in future experiments.

This research was supported by the National Institutes of Health. To see more images and videos of basic biomedical research in action, visit NIH's Biomedical Beat Cool Image Gallery.