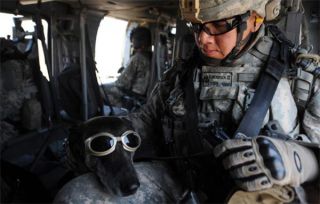 Cry havoc, Shakespeare wrote, and let slip the dogs of war. The U.S. military has taken the Bard's words to heart, but with a new, high-tech way of finding the very best dogs for military operations.

DARPA, the military's Defense Advanced Research Projects Agency, is planning to use functional magnetic resonance imagery (fMRI) to scan the brains of puppies. Those that show a lot of neural activity in the ventral caudate — a brain region associated with positive rewards — will be selected for training, Wired reports.

By selecting those pups, the military hopes their enhanced reward impulses will make it easier, faster and cheaper to train the dogs to carry out complex tasks. "Belly rubs won’t cut it anymore," said Wired.

DARPA's interest in this training technique is backed by some recent research into the way dogs' brains respond to rewards. Last year, Gregory Berns of the Emory University Center for Neuropolicy reported that when dogs saw a hand signal meaning "treat," their ventral caudate lit up with activity on fMRI scans.

DARPA researchers pricked up their ears when those study results were published, Wired reported, and are now soliciting for research into military applications for these specially trained dogs.

Their objective, according to the DARPA research request, "is twofold; first, to optimize the selection of ideal service dogs … and second, to use real-time neural feedback to optimize canine training, shortening training duration, reducing costs and increasing learned responses."

Of course, the military has been using dogs for decades to detect explosives, to sniff for drugs and even to engage in combat operations, according to the Daily Mail. In the mission to kill al-Qaida leader Osama bin Laden, a Belgian shepherd named Cairo was strapped to a soldier and lowered into the terrorists' compound from a helicopter.

An equally important part of the new military program, code-named FIDOS (Functional Imaging to Develop Outstanding Service Dogs), will be therapeutic work with veterans returning from deployment, according to their research request.

"The mechanisms of canine TBI [traumatic brain injury] and PTSD [post-traumatic stress disorder] therapy effectiveness are not well understood, and training and implementation methods are ripe for improvement," the FIDOS request states. "One hypothesis is that effective therapy dogs are better able to sense their owner’s mental state and emotions."

FIDOS hopes to improve therapeutic dog training by first selecting the dogs best-suited to the task: "This method of canine neuroimaging could be used to identify 'brain hyper-social' dogs ideally suited to TBI or PTSD therapy work."