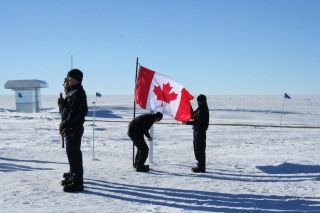 A memorial was held at the Amundsen-Scott South Pole Station for the three crew members that perished in a plane crash in a remote corner of Antarctica during a supply mission on Jan. 23, 2013.
(Image: © Photo by: Blaise Kuo Tiong, NSF)

A frustrating four-day search-and-rescue operation for a small plane that crashed in a remote part of Antarctica has come to an end with the location of the wreckage site and the confirmation that all three crew members perished in the crash.

One the night of Jan. 23, New Zealand time, communication was lost with the de Havilland DHC-6 Twin Otter aircraft, which was running a supply mission from the Amundsen-Scott South Pole Station to an Italian research station on Terra Nova Bay under the auspices of the Italian National Agency for New Technologies, Energy and Sustainable Economic Development, according to the U.S. National Science Foundation, which runs the South Pole station.

The search-and-rescue operation, run by the Rescue Coordination Centre in Wellington, New Zealand, with cooperation from the United States and other countries, was hampered for days by bad weather and poor visibility, the National Science Foundation said.

Antarctica's fickle weather has hampered evacuation operations before, particularly in harsh winter conditions. Renee-Nicole Douceur, the manager of the Amundsen-Scott station, suffered a stroke in August 2011, but could not be evacuated for several months because of the danger of flying and landing in austral winter, when the continent sees 24 hours of darkness.

On Saturday afternoon (Jan. 26) local time, a ski-equipped LC-130 aircraft flew from the U.S.-run McMurdo station on the coast to the last known position transmitted from the Twin Otter's emergency beacon. Flying overhead, the search team spotted the plane's tail on a steep slope at an altitude of 13,000 feet (3,900 meters) on Mt. Elizabeth, a 14,500-foot (4,480 m) peak in the Queen Alexandra Range of the Transantarctic Mountains, the NSF said in a statement. The crash site was located about halfway between the South Pole station and McMurdo, according to the New Zealand search and rescue organization.

A later aerial survey of the wreckage site determined that fixed-wing aircraft would not be able to  land there, so two helicopters landed at a small camp about 31 miles (50 kilometers) from the site to support the rescue operation.

An initial assessment by the owner of the plane, Kenn Borek Air Ltd. of Calgary, Canada, determined that the crash was "not survivable." It was later confirmed that the three crew members, all Canadians, were killed. The men's next of kin have been notified, the rescue organization said.

"On behalf of the U.S. National Science Foundation and all in the U. S. Antarctic Program, I wish to extend our profound sympathies to the families, friends, and colleagues of the three Kenn Borek Twin Otter crew, whose deaths in Antarctica while en route to support the Italian national Antarctic science program have recently been confirmed," Kelly K. Falkner, director of NSF's Division of Polar Programs, said in a statement.

A memorial was held at the Amundsen-Scott station for the crew members.

An operation was launched today (Jan. 28) to recover the wreckage and the remains of the crew, but the team was called back after an examination of the site revealed the plane, embedded in snow and ice, was too dangerously situated to disturb. The team was able to recover the cockpit voice recorder, which authorities hope will shed light on the cause of the crash. The remains of the crew could not be recovered.

Any further attempt to recover the crew remains or further wreckage will have to wait until the beginning of the next Antarctic research season, in the austral spring and summer.