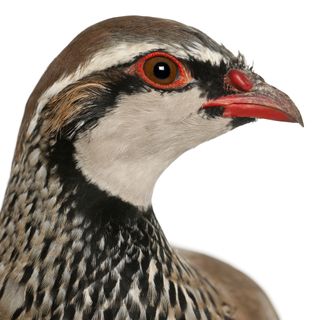 Red-legged partridges have fractal patterns in the black-and-white plumage on their chests. The complexity of these fractals correlates with the individual's health and fitness, a January 2013 study found.
(Image: © Shutterstock/Eric Isselee)

For birds, fractals are a turn on.

A new study found that the complexity of fractal patterns on a bird's chest communicates the animal's fitness to potential mates.

Scientists studied male and female red-legged partridges (Alectoris rufa), which both display complicated black-and-white patterns of plumage on their chests. The size, shape and complexity of these patterns can be quantified by what's known as fractal dimension (FD).

Fractals are self-similar repeating patterns that show the same structure when zoomed in and out. Fractals are found throughout nature, from seashells to mountain ranges to broccoli, and apparently, the plumage of red-legged partridges. [5 Seriously Mind-Boggling Math Facts]

In a new study, scientists found that the healthier a bird is, the more fractal-like its plumage becomes.

"We have shown that fractal geometry can reveal biologically meaningful information encoded in a complex plumage trait: the black-spotted bib of the red-legged partridge," the researchers wrote in a paper published Jan. 23 in the journal Proceedings of the Royal Society B."Our correlative results indicate that both better condition and greater immune responsiveness can be predicted from bibs with higher FD."

The team, led by Lorenzo Perez-Rodrıguez of the Museo Nacional de Ciencias Naturales in Madrid, Spain, first used skin tests to measure immune responsiveness, or how robust and healthy the birds' immune systems (the body system that fights off foreign invaders) were. The scientists found that fractal dimension predicted immune responsiveness, meaning that partridges with more complex fractals on their plumage tended to have stronger immune systems.

The scientists also studied the relationship between bird health and fractals by restricting the diets of 33 male and female partridges during their molting period, while letting 35 others eat as much as they liked. This resulted in the first set of birds weighing around 13 percent less than the control group.

The researchers then photographed the partridges' bibs, and found the complexity of fractals was significantly reduced on the birds whose food had been restricted. After losing weight, the same birds would grow in plumage with a lower fractal dimension than they had before, while the birds whose weight stayed steady didn't show any change in FD.

Overall, the study found that birds' fractals communicated a lot about the health of individuals, which could provide a valuable way for red-legged partridges to judge potential mates.

"Our work justifies further studies on fractal perception in animals, depending on their visual processing abilities," the researchers wrote.

Some studies on humans have found that people prefer art, both abstract and representative work, with more fractals, and that the FD rating "subconsciously influences our perception of beauty and aesthetic preferences," the scientists said. "Non-human animals may similarly prefer traits with higher (or lower) FDs, particularly if these advertise a better individual quality, as we report here."