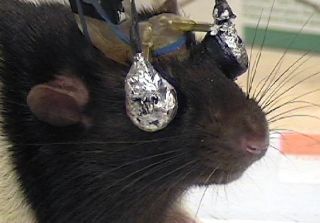 A rat sports a pair of special goggles that deliver different visual cues to each eye.
(Image: © Marshall Hussain Shuler)

Rats are sporting tiny, sci-fi-esque goggles in the name of science. The result: In addition to providing some pretty cute images, the fashionable rats have revealed that parts of the brain related to vision also help animals predict future rewards.

An animal's ability to predict events is vital for avoiding danger and obtaining basic resources, such as a rewarding drink of water. Though scientists had known rats had the ability to make predictions, they thought only higher cognitive areas were involved. Now a new study, to be published in February in the journal Neuron, reveals how the vision center of a rat's brain can learn to time when a reward is imminent.

While the study was in rats, it could prove to be a good model for how learning occurs in the human brain, too.

"This is a fantastic example of how the response of cells changes due to a behavioral paradigm," said theoretical neuroscientist Harel Shouval of the University of Texas Medical School at Houston, who was not involved in the study but has worked previously with the researchers. "We can see the cells learning new behavior," he said.

Just as Pavlov's dog learned to associate the sound of a bell ringing with dinnertime, rats can learn to associate flashes of light with how long they must wait to receive a sip of water. Researchers outfitted rats with goggles that flashed a light in one of the animal's eyes to signal the rat to lick a spout in order to receive a drop of water.

A flash in one eye indicated a certain number of licks were required to release the water, while a flash in the other eye signaled that many more licks were necessary. The rats learned the connection between a signal to each eye and the licking time required. The researchers recorded the rats' brain activity using electrodes as the animals completed the task. Results showed, neurons in a vision center of the brain became active in response to one expected licking interval or the other, but not both.

Next, the researchers probed how this learning mechanism works. Nerves from a part of the rat brain known as the basal forebrain are thought to secrete the chemical acetylcholine into the brain's main vision center, also called the primary visual cortex, reinforcing connections that were recently active. When the scientists injected the rats with a neurotoxin that blocks those acetylcholine-releasing nerves, however, the rats' brains continued to remember the licking time for each signal, suggesting the acetylcholine and basal forebrain weren't needed to maintain those associations.

But then the scientists switched the visual cues, so a flash to the eye that signaled less licking now signaled more licking, and vice versa. Then they injected the neurotoxin into some rats but not others. The rats that didn't receive any neurotoxin learned the new association, but those that received the neurotoxin couldn't make the switch; their brains continued to remember the old mapping. The results indicate that the brain's primary vision area plays an important role in learning and relearning new associations.

There's more work to be done, says Shouval, but the findings strongly suggest that the primary visual cortex is not only sensory, but is involved in learning new behaviors as well.