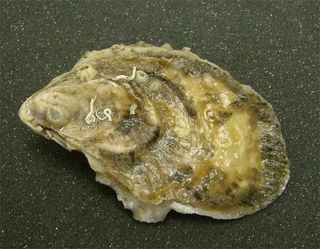 For a simple bivalve, the oyster has played an unusual role in human history. It's celebrated as a food source, as a reputed aphrodisiac and, now, as a possible savior of coastal cities threatened by flooding.

Point Pleasant, a community in New Jersey that was pummeled by Hurricane Sandy last October, is looking at oyster beds as a way to mitigate future flood damage. A sizable bulwark of oyster beds might slow future storm surges by acting as a natural seawall, the Asbury Park Press reports.

"It's a solution," Dennis Blazak, a local resident and member of the Climate Action Committee of Point Pleasant Borough, told the Press. "What we're trying to do is adapt to the climate change. If we keep doing the same thing, it's never going to be different."

The idea of using oyster beds to mitigate storm damage appears to be getting some traction among local officials. "It seems on paper to be an all-around win," borough councilman Chris Leitner told the Press.

"There has to be environmental studies, but it's a very exciting idea, and we're going to be delving into it a lot in the next few months to see how feasible it is," Leitner said.

Orff emphasizes that the proposal is more practical than it might seem. "This is not some billion-dollar thing that comes down from Mars," she told Atlantic Cities. "The technology is rocks and oysters and mussels — all things that exist."

Not only would the oyster beds protect the city's shorelines, they would also filter the water by removing pollutants. One oyster is capable of filtering up to 50 gallons of water a day, removing pollutants such as nitrogen and algae, according to Atlantic Cities.

Worldwide, oyster populations are imperiled by the increasing acidification of oceans. As more carbon dioxide is pumped into the atmosphere from burning fossil fuels, the seas are becoming more acidic — and the acid environment makes it difficult for oysters to build calcium-based shells.

Huge oyster beds once stretched across much of America's northeastern shoreline, including the Barnegat Bay region of New Jersey near Point Pleasant. However, overfishing and pollution wiped out the oyster reefs once found there, Blazak told the Press.