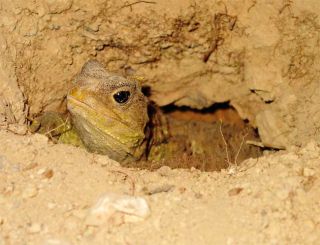 In the wild, a female tuatara (shown here) breeds between January and March and the eggs are laid the following spring or early summer. The eggs incubate in an underground nest for up to 16 months, during which time the developing embryos are vulnerable to predation.
(Image: © Nicky Nelson/Victoria University.)

A world without females may not be worth living in. And in fact extinction would be imminent. That's the lonely and dire prospect faced by the tuatara.

With rising temperatures, this endangered reptile could produce all male offspring by 2085, guaranteeing its extinction, a new study finds.

The spiny reptiles, about 30 inches (80 cm) long, are confined to small islands off the coast of New Zealand. Two tuatara species (Sphenodon punctatus and Sphenodon guntheri) are the only surviving members of the Sphenodontian family, which roamed the Earth about 200 million years ago along with the dinosaurs.

Nest temperature determines the sex of offspring for many reptiles. However, while a boost in temperature generally results in a nest full of more females than males, the opposite is true for tuatara whose offspring skew toward male in warmer climes.

Nicola Mitchell of the University of Western Australia and colleagues used data from tuatara living on North Brother Island along with climate predictions to simulate the future of hatchlings. The island is located in Cook Strait, New Zealand, and hosts the only natural population of S. guntheri.

"We'd done a census of that population and already found there were more males on the island [than females]," Mitchell told LiveScience. "We don't know if that's due to climate or not."

Under a minimum warming scenario, with a temperature increase of 0.2 to 1.4 degrees Fahrenheit (0.1 to 0.8 degrees Celsius), they found small increases in the proportion of mixed-sex nests relative to all-female nests by the 2080s.

When temperatures were upped by 7.2 degrees F (4 degrees C), the model showed nearly all island locations would hold all-male nests. The only sites with mixed-sex nests occurred in a narrow band along south-facing cliff tops.

Tuatara have such a slow lifestyle that they probably won't adapt to the temperature bumps modeled in this study, according to Mitchell. "They take about 23 years to mature, and females only breed every nine years," Mitchell said. "They aren't going to adapt like a fruit fly could."

The best chance to ensure tuatara survival in a warming world lies in translocation to areas where suitable temperatures are predicted to persist, the researchers say in the July 3 issue of the journal Proceedings of the Royal Society B.

This study was funded by the Royal Society, the Journal of Experimental Biology, Victoria University of Wellington and the Australian Research Council.