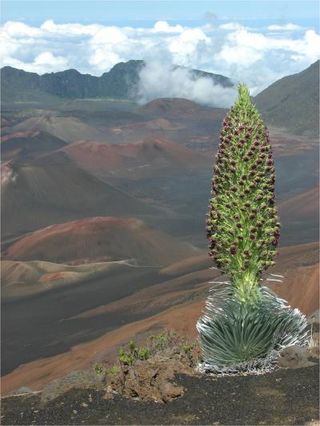 A Haleakalā silversword in bloom, with Haleakalā crater in the background on the island of Maui.
(Image: © Paul Krushelnycky, University of Hawaii at Manoa)

One of Hawaii's iconic plants is again at risk.

The striking and rare Haleakalā silversword, found only on the high volcanic slopes of Maui, is on the decline, scientists report today (Jan. 15) in the journal Global Change Biology.

First, the plant was nearly killed off by cows and collectors starting in the 1880s, then conservationists made it a success story after the 1930s. Now climate change is bringing about a new collapse.

The culprit is shifting weather patterns, which have made the plant's environment too dry and warm for new seedlings to survive. Older plants are dying, too, said study co-author Paul Krushelnycky, a biologist at the University of Hawaii, Manoa.

The 2010 survey atop Haleakalā volcano on the island of Maui revealed less than half of plants (47 percent) at lower elevations around 7,100 feet (2,185 meters) were alive, indicating a substantial decline since the 1990s.

Baby plants are also struggling to grow in the drier conditions. Even with population booms during wet years, the seedlings die within two to three years, the study found.

"If these climate trends continue, it doesn't look good for this subspecies," Krushelnycky said.

The Haleakalā silversword is iconic in Hawaii, which has more endangered species than any other state. With a ball-shaped base and hairy, silvery leaves, the plants are one of 30 species in the silversword alliance. The alliance evolved from a small, daisy-like plant called the tarweed that arrived in Hawaii from California about 5 million years ago, Krushelnycky said. "The silversword is one of the more extreme forms, but it can grow next to one of its relatives, like a green-leafed shrub, and actually hybridize," he said.

Living for 40 to 50 years on thin, poorly developed volcanic soil in high winds and temperatures that regularly drop below freezing, the silversword is literally a textbook example of biological adaptation.

The Haleakalā silversword flowers only once, usually in summer, sending a spike up to 6 feet (2 meters) tall into the sky with as many as 600 blooms. Then the plant dies.

A combination of climate changes is stressing the silverswords, the researchers said. Local temperatures are warming, but the biggest factor affecting the plant's growth rate is a dropoff in annual rainfall, Krushelnycky said.

Rainfall in Hawaii is driven by trade wind patterns, and there are fewer days with moisture-laden winds than 40 years ago. Silverswords also get moisture from breaks in the island's inversion layer, which traps moist air below its cooler, drier air. "We're getting fewer interruptions of that inversion layer, and fewer moisture events are getting into their habitat," Krushelnycky said.