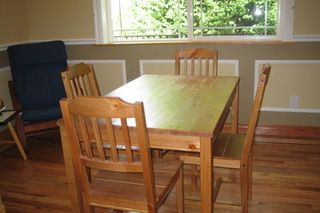 Is it their long, slender legs that makes some people crave sex with furniture?
(Image: © Public domain)

Hanky-panky on a Hollywood casting couch may be one way for an ambitious starlet to become famous. But one Wisconsin man has become famous — or infamous — through hanky-panky with a couch.

On the night of Sept. 3, 2012, an off-duty police officer was jogging through a residential neighborhood of Waukesha, Wis., when he spotted someone who appeared to be having sex on a yellow couch that had been abandoned on a street curb, according to the Smoking Gun.

But when the officer got closer to the couch, he saw that Gerard Streator, 47, was quite alone and his hips appeared to be "thrusting up and down on the couch," according to the official criminal complaint. The officer quickly deduced that Streator was "trying to sexually gratify himself by rubbing his penis between the two cushions."

Streator allegedly ran off, but was later arrested at the Country Springs Hotel in Waukesha where he is an employee, the Smoking Gun reports. Streator is scheduled to enter a plea in Waukesha County Circuit Court on Feb. 25.

Human beings, of course, have a long and ignoble history of aberrant sexual behavior, and though "furniture-philia" has yet to enter our lexicon, Streator's not the first to be accused of it. In 2008, an Ohio man was caught copulating with a picnic table, according to the Daily Telegraph. Apparently, the table's umbrella hole was too alluring for the 40-year-old man, who was filmed during the act — on four different occasions.

And Cracked.com reports that in 2008, a Hong Kong man was so filled with unquenchable desire for a metal park bench that he began fornicating with it, until his penis got stuck. It took a small army of emergency personnel to saw away at the bench and free the man.

But men don't hold a monopoly over sex with inanimate objects: In 2012, a 37-year-old woman in Sweden was accused of having sex with the bones of a human skeleton. She claimed her desire was motivated by an interest in history.

Perhaps in response to her case and others like it, the state of Illinois has now outlawed sex with human remains, making "rest in peace" a far more meaningful phrase.