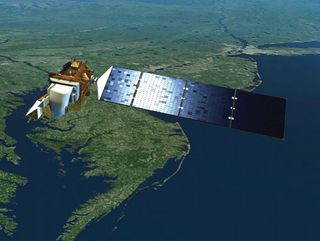 What the Landsat Data Continuity Mission (LDCM) will look like in space.
(Image: © NASA)

NASA plans to announce tomorrow (Jan. 10) the launch of a new satellite, the Landsat Data Continuity Mission (LDCM), to monitor Earth's landscape and the changes to it.

The new satellite, scheduled to launch Feb. 11, will replace the Landsat 5 satellite, which is to be decommissioned in the coming months, the U.S. Geological Survey reported in December.

The announcement will be made at 1 p.m. EST at NASA headquarters in Washington. You can watch it live here, as well as on NASA Television and the agency's website.

Landsat 5 is the longest-operating Earth-observing satellite mission in history, according to the USGS. Launched in 1984 with a three-year design life, it has been taking images and recording changes on the Earth's surface ever since. The satellite almost failed several times, but engineers brought it back to life. However, the recent failure of a gyroscope (which helps satellites maintain their orientation) left no option but to end the mission, the USGS said in its release.

"Any major event since 1984 that left a mark on this Earth larger than a football field was likely recorded by Landsat 5, whether it was a hurricane, a tsunami, a wildfire, deforestation or an oil spill," USGS Director Marcia McNutt said in the statement. "We look forward to a long and productive continuation of the Landsat program, but it is unlikely there will ever be another satellite that matches the outstanding longevity of Landsat 5."

The satellite monitored the effects of the devastating floods along the Mississippi River in 2011, snapped an image of the path of a tornado in Massachusetts that same year, and helped the effort to battle raging wildfires in Arizona.

LDCM, like Landsat 5, is a collaboration between NASA and the USGS that will continue the Landsat program's 40-year data record of monitoring Earth from space. Landsat 5 has orbited the globe more than 150,000 times and recorded over 2.5 million images.