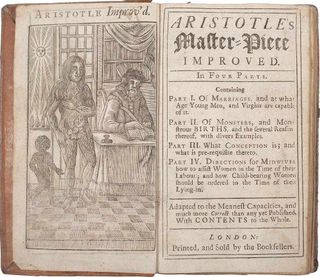 The rare book up for auction at Lyon & Turnbull called "Aristotle's Compleat Master-Piece" is actually a sex and pregnancy manual from the 17th century; it may have been banned in Britain.
(Image: © Image courtesy of Lyon and Turnbull)

A sex and pregnancy manual from 1680 that was incorrectly attributed to Aristotle is going up for auction this month at Lyon & Turnbull in England.

"Aristotle's Compleat Master-Piece" may have been banned in Britain until the 1960s, according to some sources, though that is uncertain. One thing is for sure: "It was taboo and a lot of people didn't want their name on it," said Lyon & Turnbull book specialist Cathy Marsden, during an interview.

As for why the book was pegged to Aristotle, "we think it was just to kind of raise the profile of the book," Marsden said. Also, there has been some suggestion that bits of the book, though not very much at all, could be attributed to Aristotle's work. Bits also seem to come from the work of 17th-century physician Nicholas Culpeper and 13th-century saint and grand thinker Albertus Magnus.

The book, though taboo, was by no means "The Joy of Sex," the 1972 cookbook-esque writing known for its explicit drawings of sex poses and the like. Images in this "master-piece" show a woman's torso and drawings of hairy children with extra limbs, and according to the Guardian, an image showing a woman's torso opened up to reveal a baby in her womb. But there are no actual explicit images, she said. [The Sex Quiz: Myths, Taboos & Bizarre Facts]

"It kind of explains the approach to marriage and when young people should be getting married and then it goes on to try to explain why children have deformities; they call it monstrous births," Marsden told LiveScience. "They explain how to conceive children and how to conceive male and female children," said Marsden, adding the book describes what type of moon to lie under to conceive a male or female child.

In the book section entitled "Of monsters and monstrous births," the author(s) describe disfigured and hairy babies as "monsters." For instance, in some editions of the book, it reads, "Another monster, representing a hairy child: It was covered with hair like a beast. That which rendered it more frightful was, that its navel was in the place where his nose should stand, and his eyes placed where his mouth should have been, and its mouth was in the chin."

"There is one bit that says a child was born black because the mother was thinking of a black man when she conceived him," Marsden said.

In a section of one edition of the book explaining "what conception is," the author writes, "The first day after the conception she feels a slight quivering or illness running through the whole body; a tickling in the womb, a little pain in the lower parts of the belly." That passage goes on to describe the "giddiness" felt and "pimples in the face" that apparently were thought to occur days after conception.

Another section details "directions for midwives."

The edition being auctioned at Lyon & Turnbull may have been published in 1766, according to The Guardian.

The bidding will start on Jan. 16 at the auction house in Edinburgh at between 300 and 400 British pounds (between $487 and $650). Other items going up for auction the same day include the rare, eight-volume history "A History of the Birds of Europe," by 19th-century ornithologist Henry Dresser, as well as a hand-colored 16th-century map of Africa, Marsden said.