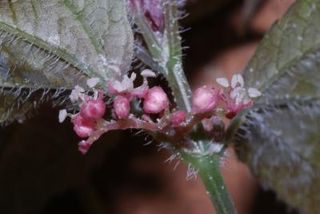 Flowers of a new species from the nettle family known only from caves, Pilea cavernicola, where it grows in very low-light conditions.
(Image: © Alex Monro)

One might not expect flowering plants with pinkish petals to be flourishing on the floor of a dark cave, but that's exactly where researchers discovered such a species in southern China.

Botanist Alex Monro, of London's Natural History Museum, said he thought his Chinese colleague must have been mistranslating a word when he first mentioned the cave-dwelling plants. But then Monro saw the flora for himself.

"When we stepped into our first cave, Yangzi cave, I was spellbound. It had an eerie moonscape look to it and all I could see were clumps of plants in the nettle family growing in very dark condition[s]," Monro said in a statement.

The newly described plant was dubbed Pilea cavernicola. While it doesn't grow in total darkness, it survives with levels of light as low as 0.04 percent of full sunlight in caves in China's Guangxi province, the researchers said.

The team also found two other nettle species in gorges in the region. One plant (Pilea guizhouensis) was discovered in petaloid travertines at Malinghe Gorge. These unusual rock formations are created by limestone deposits from mineral springs that over time form large petals of rock, which, in this case, cling to the vertical walls of the canyon. The other nettle (Pilea shizongensis) has deep pink flowers and grows on the shaded floors of the Feng Huang Gu gorge.

The Pilea genus of nettles is believed to include over 700 species worldwide, up to one-third of which are thought to be awaiting description.

The new species were described online Friday (Dec. 28) in the journal PhytoKeys.