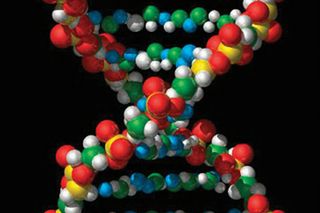 Some geneticists believe research into the genomes of violent criminals may reveal abnormalities in their DNA.
(Image: © NASA)

As people around the world struggle to make sense of recent mass murders like the school shooting in Newtown, Conn., genetic researchers are also getting involved. The DNA of the shooter in the Newtown case, 20-year-old Adam Lanza, will be examined to determine if he possessed any genetic abnormalities that could have led to his violent behavior.

Connecticut Chief Medical Examiner H. Wayne Carver, who carried out post-mortem examinations on the victims of the Newtown shooting, ordered the DNA testing, according to the Daily Mail. University of Connecticut geneticists will conduct the research, which may include sequencing Lanza's entire genome to determine if he had any mutations in his DNA.

"... [T]here are some abnormalities that are related to aggressive behavior," Dr. Arthur Beaudet, chairman of Baylor College of Medicine's department of molecular and human genetics in Houston, told the Daily Mail. "They might look for mutations … associated with mental illnesses and ones that might also increase the risk for violence.

A link between genetics and violent behavior has been suggested by other research. In 2011, researchers at the University of Nebraska, Lincoln, found that a gene called NRXN3 was associated with impulsive behavior and addiction in men. And variants of a specific low-activity MAOA gene — the so-called "warrior gene" — were found in boys who were more likely to join gangs, engage in violence and use weapons.

But attempts to link biology with criminal behavior have a checkered past. Phrenology, a popular 19th-century pseudoscience, linked certain head shapes with personality traits — including a propensity to crime, as demonstrated by a low brow or a sloping chin — was until it was thoroughly debunked.

In 1965, another now-discarded theory proposed that men with an extra Y chromosome were "born criminals," according to the New York Times. These efforts to predict or manage delinquent behavior may express our desire to understand crimes that defy comprehension — like the slaughter of 20 children in a Newtown elementary school.

"It is almost inconceivable that there is a common genetic factor" shared by mass murderers, Dr. Robert C. Green, a geneticist and neurologist at Harvard Medical School in Boston, told the New York Times. "I think it says more about us that we wish there was something like this. We wish there was an explanation."