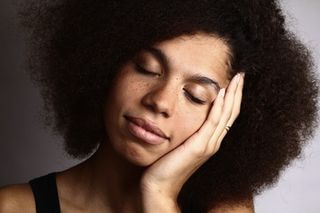 Narcolepsy, the debilitating neurological condition marked by uncontrollable daytime "sleep attacks," has no known cure. But now a doctor in Belgium has found an innovative solution for a patient with narcolepsy: a dog trained to awaken his owner when she nods off.

A 5-year-old mongrel named Idefix has been taught to nip at his owner's ankles or ears whenever she falls asleep during the day. Idefix also wakes his owner, Annick, after her alarm goes off in the morning, reports the British newspaper Daily Mail.

Annick's doctor, Olivier Le Bon from Tivoli Hospital in La Louvière, Belgium, devised the solution to help Annick function in society, something that had challenged the 35-year-old woman for most of her life.

"Annick couldn't do simple routine tasks such as ironing or cooking because it was too dangerous if she fell asleep," Le Bon told the Daily Mail. "She is now able to move around the city, meet friends, arrive at appointments on time, cook and go for walks."

At first, Idefix seemed an unlikely candidate for a service dog. "He had a slightly peculiar character," Le Bon told the Daily Mail. "He was rather isolated from the other dogs and was quite stubborn." But after several months of training, Idefix rose to the occasion with enthusiasm.

Narcolepsy, a chronic condition with no known cause, affects about one in 2,000 people in the United States. Those with the little-understood ailment often endure interrupted nighttime sleep and bouts of muscle paralysis, as well as excessive daytime sleepiness. (Dogs can also suffer from narcolepsy.)

Annick's service dog has given her the independence she has long craved. "I had been handicapped by my condition for many years," she told the Daily Mail, "and now I feel like I have been given a second life."