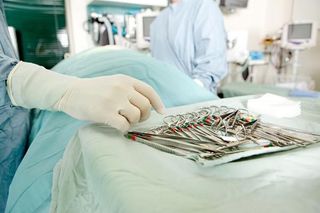 A doctor with hepatitis B who performed joint replacement surgeries unknowingly passed the virus on to at least two of his patients, according to a new report.

The report, issued by researchers at the University of Virginia Health System, said the surgeon first became aware that he had hepatitis B after he stuck himself with a needle, and underwent routine testing for blood-borne diseases. The surgeon had emigrated from a country that had a high prevalence of hepatitis B, and likely had had chronic hepatitis B for some time without showing symptoms, such as fever and nausea.

The Centers for Disease Control and Prevention and the surgeon's hospital began an investigation to identify and test all of the patients that the surgeon has treated during the previous nine months — the length of time he had worked at the hospital. Most of the surgeon's patients had undergone either hip or knee replacement surgery.

Out of 232 patients who were tested, two were found to be infected with a hepatitis B virus that was genetically identical to the one seen in the surgeon, meaning these two patients most likely caught the virus from the doctor. These patients were treated with drugs.

Another six patients had been infected with hepatitis B in the past. Because these patients did not currently have hepatitis B in their blood, researchers could not determine if the virus had been transmitted by  the surgeon. But because these patients did not have any known risk factors for developing hepatitis B, it's possible they could have caught the virus from the surgeon, and cleared it from their bodies before being tested.

The report was published in the journal Clinical Infectious Diseases in October 2012, but the incident occurred in 2009.

Hepatitis B is transmitted through contact with bodily fluids, including blood. The surgeon discussed in the report always wore two sets of gloves when he performed surgery, so it's not clear how he could have passed the virus to his patients.

"That is a bit of a mystery," said study research Dr. Costi Sifri, an infectious disease researcher and hospital epidemiologist at the University of Virginia Health System.

The researchers speculate that tiny tears in the gloves that occurred during surgery may have allowed the virus to pass from doctor to patient. In order for this  have occurred, the surgeon would likely have had to have a cut on his hands as well, Sifri said.

Just last week, it was reported that a Los Angeles surgeon transmitted staph infections to his patients during surgery, possibly through tears in his gloves.

The findings underscore the need for surgeons to know whether or not they are infected with hepatitis B, and other blood-borne diseases such as HIV, Sifri said.

The surgeon in this case had previously received the hepatitis B vaccine, but did not respond to the vaccine because he already had an infection, Sifri said.

The researchers said the name of the hospital where the doctor worked could not be released for reasons of patient confidentiality, and would not elaborate on the connection between the doctor's employer and the University of Virginia Health System.

Since 1994, there have been just two other reports of hepatitis B transmission from doctor to patient during surgery.

Pass it on: A surgeon with a chronic hepatitis B infection transmitted the virus to two of his patients.