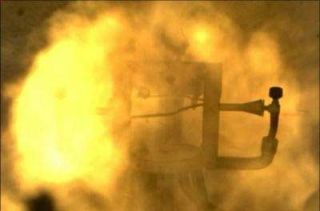 Biochemists report that a full detonation of a sample of a new type of nitrogen-rich explosive produces fewer toxic byproducts and is easier to handle than its carbon-rich counterparts.
(Image: © Courtesy of Michael Goebel, Ludwig-Maximilians University)

New explosives could be more powerful and safer to handle than TNT and other conventional explosives and would also be more environmentally friendly.

TNT, RDX and other explosives commonly used in military and industrial applications often generate toxic gases upon detonation that pollute the environment. Moreover, the explosives themselves are toxic and can find their way into the environment due to incomplete detonation and as unexploded ordnance. They are also extremely dangerous to handle, as they are highly sensitive to physical shock, such as hard impacts and electric sparks.

To make safer, more environmentally friendly explosives, scientists in Germany turned to a recently explored class of materials called tetrazoles. These derive most of their explosive energy from nitrogen instead of carbon as TNT and others do.

Tiny bombs were made from two promising tetrazoles with the alphabet-soup names of HBT and G2ZT. These materials proved less apt to explode accidentally than conventional explosives.

After the bombs were detonated in the laboratory, G2ZT also proved as powerful than TNT, and HBT more powerful than TNT and comparable to RDX, said researcher Thomas Klapötke, a chemist at the University of Munich in Germany.

In initial experiments, G2ZT and HBT produced fewer toxic byproducts than common explosives. Still, they did generate some dangerous hydrogen cyanide gas. But mixing these compounds with oxidizers not only avoids making hydrogen cyanide, but also improved performance, Klapötke said.

Klapötke and his colleague Carles Miró Sabate are scheduled to detail their findings in the June 24 issue of the journal Chemistry of Materials.

The research was financially supported by the Ludwig-Maximilian University of Munich, the Fonds der Chemischen Industrie, the European Research Office of the U.S. Army Research Laboratory, the U.S. Army's Armament Research, Development and Engineering Center, and the Bundeswehr Research Institute for Materials, Explosives, Fuels and Lubricants.