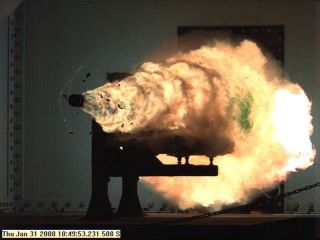 U.S. Navy engineers at the Office of Naval Research prepared and test-fired a slug from the rail gun in preparation for the record breaking event.
(Image: © U.S. Navy video by John Williams)

The big gun uses electromagnetic energy instead of explosive chemical propellants to fire a projectile farther and faster. The railgun, as it is called, will ultimately fire a projectile more than 230 miles (370 kilometers) with a muzzle velocity seven times the speed of sound (Mach 7) and a velocity of Mach 5 at impact.

The test-firing, captured on video, took place Jan. 31 in Dahlgren, Va., and Navy officials called it the "world's most powerful electromagnetic railgun."

The railgun has been a featured weapon in many science fiction universes, such as the new "Battlestar Galactica" series. It has also achieved newfound popularity among the 20-something-and-under generation for its devastating ability to instantaneously shoot a "slug" through walls and through multiple enemies in video games such as the "Quake" series of first person shooters.

The railgun's high-velocity projectile will destroy targets with sheer kinetic energy rather than with conventional explosives.

"I never ever want to see a Sailor or Marine in a fair fight. I always want them to have the advantage," said Chief of Naval Operations, Admiral Gary Roughead. "We should never lose sight of always looking for the next big thing, always looking to make our capability better, more effective than what anyone else can put on the battlefield."

The Navy's goal is to demonstrate a full-capability prototype by 2018.