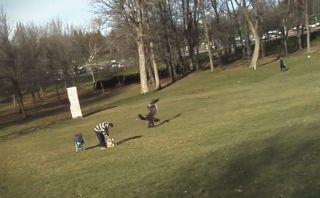 A viral video showing a golden eagle attempting to carry off a young child has been revealed as a hoax by its creators.

Students confessed to creating the video as part of a simulation workshop class at the Centre NAD in Montreal, Canada. They used 3D animation to create the depiction of an eagle swooping down and momentarily struggling to carry off the child in its talons, so that they could overlay the 3D elements on top of real video footage of a park.

Centre NAD released a statement revealing the hoax on Dec. 19, about a day after the video went up on YouTube. The video has since gone viral with more than 5 million views on YouTube.

One bird expert had told sister website Livescience that the video looked like an "elaborate hoax" because of the eagle's unnatural behavior, appearance and sound.

This represents just the latest video hoax to use a bit of computer-generated trickery to fool casual viewers. A Dutch filmmaker and animator achieved his own viral video hoax that appeared to show himself flapping a huge pair of wings to achieve human flight earlier this year.

The simulation workshop class at Centre NAD has also perpetrated other video hoaxes in the past. One less-successful video showed a penguin that had appeared to escape a zoo in Montreal.

Such video stunts may prove a clever resume filler for Centre NAD students pursuing a bachelor's degree in 3D animation and digital design. Most people don't typically see such special effects outside of big-budget Hollywood films such as the "Lord of the Rings" trilogy — a fantasy film trilogy that also happens to feature large eagles carrying a certain wizard and a pair of hobbits at certain points.

But some observers weren't laughing about the hoax. Jamie Durrant, a membership development officer at BirdWatch Ireland, worried that the video could unintentionally support false claims about large eagles posing a threat to children. (Golden eagles have the power to take down large animals such as pronghorn antelope, but don't typically associate humans with food.)

"Could I respectfully ask that you think a bit more carefully before posting such a hoax?" Durrant wrote in Centre NAD's comment section. "In many countries there are projects to re-introduce large eagles which have been previously been made locally extinct through persecution."

Durrant asked Centre NAD to clearly label the YouTube video as a fake. The YouTube video's description and title remained unchanged as of the time this story was posted.

Editor's Note: The original version of this story incorrectly stated that the large eagles in "Lord of the Rings" carried humans. The eagles actually carried a wizard and two hobbits.