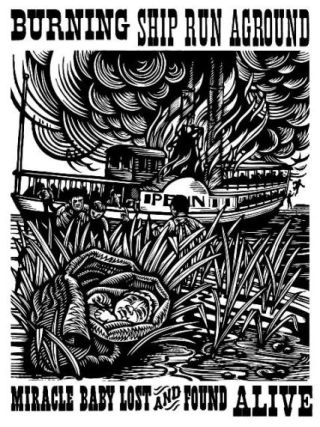 This woodcut print depicts the tale of the miracle baby, saved from the steamboat William Penn after it burned in 1834.
(Image: © Martin Mazorra / Cannonball Press)

PHILADELPHIA  — In 1834, the steamboat William Penn burst into flame for unknown reasons. The ship ran ashore near a marsh on the Delaware River, not far from Philadelphia, and its passengers jumped overboard. In the panic, a woman's baby was wrapped in a cloak and tossed from the boat to a man standing in the shallow water. But he wasn't paying attention, and the baby floated away and was presumed dead.

"Afterwards, a person discovering the cloak, thought to rescue it from the tide, when, to his utter astonishment, he perceived it contained a living child," according to an account of the incident appearing in the Philadelphia Inquirer on March 5, 1834. "He conveyed it to careful hands; and the next morning it was restored to its anxious mother."

That's just one story from "Disasters on the Delaware," an exhibit at the Independence Seaport Museum that chronicles the long history of disasters and shipwrecks on this prime waterway, which connects Philadelphia to the Atlantic Ocean. The Delaware River has long been an important route for commercial traffic, continuing up to today; Philadelphia is the busiest oil port on the Eastern Seaboard.

The exhibit does a good job of telling the colorful and often tragic tale of ship accidents on the river, while also showing how these tragedies have led to better shipping regulations. Each major incident covered in the exhibit is illustrated with a series of excellent woodcut prints by Cannonball Press, a Brooklyn-based company that describes itself as "world kings of scruffy black-and-white hillbilly pirate printmaking."

The exhibit begins with the first notable wreck in what was then the American colonies, that of the British merchant ship Severn, which was sunk by a nor'easter  in 1771, carrying many items including "broadcloths of the most fashionable colours." [Shipwrecks Gallery: Secrets of the Deep]

The museum account then goes through the history of steamboat accidents, which happened during the heyday of the boats in the 19th century, giving one the impression that exploding was one of a steamship's favorite pastimes.

Another grisly tale is that of the Camden ferry, whose smokestack caught fire in mid-March 1856, leading to the deaths of dozens of commuters returning home to New Jersey from work in Philadelphia. This accident occurred right outside the present-day location of the exhibit, which has windows that look out onto the Delaware. (On a recent December afternoon, however, all that was visible on the river was a leisure boat and an egregiously long barge.)

All of these accidents gradually led the U.S. government to implement safety measures on these engines. "That's why regulation is good," said Craig Bruns, the museum's chief curator. The mounting river carnage also led to the creation of Philadelphia's first fireboat in 1900.

The 20th century bore witness to carnage of a different kind: mishaps involving ships containing oil and other chemicals. In one example, the oil tanker Mission San Francisco was torn in two by another oncoming freighter in early March 1957, causing the former to explode and sink, killing about nine people. "In a car, you can put on the brakes — you just can't stop a boat," Bruns told OurAmazingPlanet.

Then there's the barge that went up in flames in 1978, sending up a thick plume of smoke that could be seen for 20 miles (32 kilometers). And there's the heroic tugboat crew that dragged a burning vessel away from port to prevent the whole area from incineration in 1961.

For any more tales, though, you'll have to visit the exhibit yourself.

After all of the carnage, today's river watchmen, like the fire department, are given their due in the exhibit. Today, many different agencies help keep the Delaware relatively disaster-free.

"Really, the river is pretty darn safe today," Bruns said. "We've learned a lot from all of these horrible experiences."

"Disasters on the Delaware" can be seen at the Independence Seaport Museum, Penn's Landing, Philadelphia. It's open until 2014. Find more informationhere.