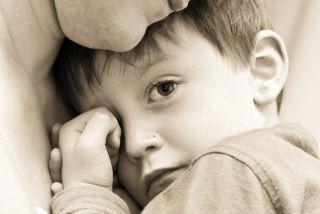 Children and adults will experience grief differently in the wake of the Newtown school shootings.
(Image: © Tom Gowanlock Shutterstock.com)

Three days after the Sandy Hook Elementary School shootings, in which 20 children and six adults were murdered, parents and children are struggling to come to grips with the tragedy.

The grieving process will be long and painful for everyone involved, but children and adults will experience grief very differently, said J. Worth Kilcrease, a bereavement counselor in Austin, Texas. And such highly devastating events can traumatize an entire community.

While the idea that people progress through five stages of grief — denial, anger, bargaining, depression and acceptance — has become a kind of folk wisdom, the reality of the grieving process is much messier, several psychologists say. [How to Cope with Fear After School Shootings]

"It's more like a stew that's cooking on the stove," Kilcrease said. "You have all these emotions, they come up to the top, and then something else comes up. It's this constant churning of all these emotions happening at the same time."

While such a devastating loss may bring up common themes, there is no sequential order to the stages of grieving, said Peter Langman, a psychologist in Allentown, Penn., who has studied school shootings.

"It's not like one happens, and then once you're done with that the next happens."

One of the most difficult experiences for those directly connected to the shooting will be accepting the reality of what happened, Langman said.

For adults who have experienced the tragedy, such a horrific event can shatter their entire concept of the community and world they live in.

"It is a violation of everything they believe about the world they live in," he told LiveScience. "It just shatters people's whole world."

Those affected by the tragedy will also grapple with how to maintain links to lost loved ones, while also finding a way to say goodbye, he said.

While some people may take comfort in keeping out photos and visiting the graves of departed friends and family members, others will find the experience too painful and may want to avoid talking about their lost loved ones for a while, he said.

"There's no simple way through it," he said.

Children may have an especially hard time understanding what has happened, because many of them, who may be just 6 or 7 years old, are too young developmentally to understand the permanence and irreversibility of death, Kilcrease told LiveScience.

These children may be 10 or even 11 years old before they fully grasp what's happened, at which point they might show signs of worry, fear or sadness related to the event, he said.

Children also process their grief in smaller doses, he said.

"They can't really absorb all of the reality of this in one fell swoop," Kilcrease said.

That means they may ask a question about the shooting and then, suddenly, show no interest in talking about it anymore, he said. But months or even years later, questions may again come up. That's perfectly normal, and parents shouldn't push kids to talk more than they want to, he said.

The youngest children may still engage in magical thinking, so they may ask questions about the logistics of death, such as how their lost friends or family members can eat while they are lying underground, he said.

As children begin to process their grief, they may develop a sense of survivor's guilt and ask, "Why did I live and they died?" he told LiveScience.

For parents, the important part is to remain available, to be patient and responsive to children's questions, but not to inundate kids with too much detail, he said.