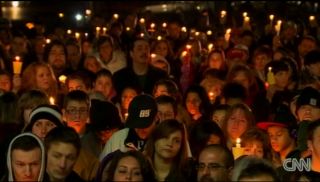 A vigil in Stratford, Conn. for the victims of the mass shooting at Sandy Hook Elemtary School
(Image: © Video screengrab/CNN)

Post-traumatic stress disorder is usually thought of as a condition of individuals. But mass-shooting tragedies like the one that happened in Newtown, Conn., last week can cause a community to experience collective traumatic stress, experts say.

After such events occur, about 10 to 15 percent of people in the community will have symptoms of post-traumatic stress or depression, said James Hawdon, a professor of sociology at Virginia Tech University, in Blacksburg  where a mass shooting occurred in 2007. But there is also a broader effect on the community.

"The entire community often defines itself as being the target, as being the victim," Hawdon said. The tragedy can cause collective disbelief and shock, he explained.

Contributing to the collective trauma is the fact that a number of people in the community will lose members of their social network, Hawdon said.

"Social relations  are traumatically upset in the community," Hawdon said. "When the numbers of victims are high, you're talking about a significant number of communal residences whose lives have been affected," Hawdon said. The Newtown shooting killed 27 people, 20 of whom were children, and the Virginia Tech shooting killed 32 people.

While not exactly the same as the "five stages of grief" typically experienced by an individual, communities do go through several stages of recovery, Hawdon said.

During the first stage, there are outpourings of grief and sympathy from members of the community, and talk of the tragedy dominates the local conversation, Hawdon said.

Later, discussions address broader questions, such as how to prevent these tragedies from happening again, Hawdon said. This can be an important part of the recovery process, said Froma Walsh, co-director of the Chicago Center for Family Health. "There is no way to go back and change the tragedy that has happened," but communities can try to do everything they can to stop it from happening again, Walsh added.

Finally, focus on the incident starts to subside. This can be a source of contention within a community, as some members may wish to continue to discuss the tragedy, while others think it best to move on, Hawdon said. The level of contention that occurs depends on how cohesive the community was beforehand, he said.

A coming together of the community through gatherings and vigils provides a network of support to help people deal with the emotional stress and strain caused by the tragedy, Hawdon said.

Community meetings and events, such as those held by local clubs and businesses, are important in sustaining this solidarity, Hawdon said. Events scheduled shortly after the tragedy are often canceled out of respect for victims, but this may not be the best strategy, Hawdon said. Instead, members should consider holding the events anyway, although not necessarily sticking to the original agenda. Instead, the events can be opportunities for people to discuss their feelings, Hawdon said.

Research by Hawdon and colleagues has found that online communication, such as tweeting and posting on Facebook, can help people cope with the tragedy, but only if they are  balanced with face-to-face interactions. Virtual interactions should supplement, but not replace, real-life support, Hawdon said.

Pass it on:Large-scale tragedies can cause collective traumatic stress within communities.