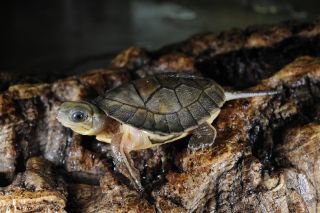 The hatching marks a significant population boost for the species, since there are only estimated to be 150 left in the wild. Chinese yellow-headed box turtles once flourished in streams in parts of eastern China, but have been pushed to the brink of extinction by human consumption, use in traditional medicine, habitat loss and the pet trade, according to the WCS.

Zoo officials say they had to set the mood to get the rare turtles to breed, which involved creating specific environmental and climate conditions.

"The biology of the species requires the adults to hibernate prior to breeding," Don Boyer, herpetology curator at the Bronx Zoo, said in a statement. "We carefully monitor the environment and gradually reduce the temperature in order to induce a natural state of hibernation. Following hibernation, turtle pairs are introduced and carefully monitored to watch for evidence of courtship and breeding activities."

The species ranks among the top 25 endangered turtles in the world — some of which WCS officials say they're trying to save. The organization has programs that include breeding and reintroducing some of these rare turtle species into the wild as well as developing assurance colonies for other kinds of turtles to prevent the loss of genetic diversity.