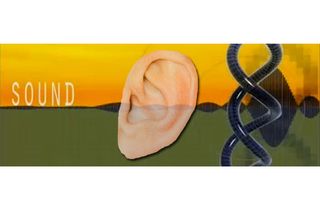 (ISNS) -- Some people lose their hearing because they simply age; some because of too much loud noise. For some, the ability to hear never developed.

Researchers at the Scripps Research Institute in La Jolla, Calif., have discovered a protein that is responsible for one form of genetic deafness. The protein helps turn sound into electrical signals.

The research is of more than just biochemical interest; it may also open a new avenue for possibly giving the sense of hearing to some of those who are born without it.

The team, led by Ulrich Mueller, a professor of cell biology, took newborn deaf mice and inserted the protein, called TMHS, into their sensory cells for sound perception, giving the mice some form of hearing. The potential now exists for genetic therapy to insert the genes for the protein into newborn humans and fix malfunctioning cells.

The work is published in the Dec. 7 issue of the journal Cell.

No one knows how many people suffer from genetic deafness but they surely number in the millions, Mueller said. According to the Centers for Disease Control and Prevention, genetic causes are responsible for half the children born deaf in the U.S.

Sixty genes have been identified so far, and there likely are many more to be found. Mueller said that the best guess now is that there are 400-500 genes and proteins responsible for genetic deafness.

Hearing evolved tens of millions of years ago in all its complexity. Fossilized dinosaur remains 120 million years old have similar structures to human ears, and all living mammals now do as well. Some ears, like those on dogs and dolphins, do a better job than human ears and are able to detect a broader range of frequencies.

The molecular mechanism remains largely unknown, said Paul Fuchs, professor of otolaryngology at Johns Hopkins University School of Medicine. Invertebrates use a different method of hearing. Moths can hear bats that might eat them and try to evade them; mosquitoes sing to each other, but studying them doesn't help scientists unravel how we hear.

Proteins are the key to the mammalian system that converts mechanical energy -- sound waves or vibrations -- into electrical energy that the brain can "hear."

Sound is channeled by our outer ear into the ear canal where it strikes the ear drum in the middle ear. The eardrum vibrates, and those vibrations move utilizing a set of delicate bones deeper inside the ear to the cochlea, a spiral structure filled with fluid. The vibration in the bones shakes the fluid in the cochlea.

A complex of hair-like cells in the cochlea senses the vibrations in the fluid.

"The hair cells have stereocilia, little filaments, projections that stick out from the hair cells," Mueller said. The stereocilia sense the motion. It is at that point, the proteins get involved.

The proteins trigger electrical signals in nerve cells surrounding the hair cells. The signals then travel to the brain and are sensed as sound, Mueller said.

The proteins open holes in the hair cells called ion channels. Ions are atoms or molecules with an electric charge.

"Anything that goes into a cell is controlled by proteins," Mueller said.  "The language of the brain is electricity. If you want to send an electric signal, you open the pores in the membrane and let the ion into the cell and that change leads to an electric current."

TMHS is one of those proteins. Mueller and his team found that when it is missing, otherwise normal hair cells lose the ability to transmit signals.  In another experiment, they simulated hearing in a test tube, bouncing sound off hair cells. If the cells had TMHS, they converted the signals to electric impulses; without the protein, nothing happened.

Fuchs said the possibility of using finds like this to reverse deafness is not unreasonable.

"It has been done on mice lacking a certain protein," Fuchs said. "But it's very experimental."

The usual technique is to introduce a normal gene into a virus and then insert the virus into the inner ear.

"It's not something you do lightly with humans," Fuchs said.