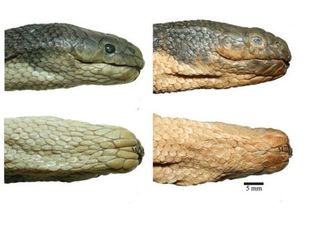 The deadliest sea snakes in the world can be found from the Arabian Peninsula to Australia. They like to live in estuaries and lagoons near the shore and have been known to get tangled in fishermen's nets and inflict fatal bites. Their venom is extremely toxic, more potent than that of a cobra.

But the deadliest sea snake has a secret — it is actually two sea snake species, as pointed out by Ed Yong in his blog Not Exactly Rocket Science.

Scientists once thought that snakes in Australia and Asia were the same species, Enhydrina schistosa. The snakes from these regions do look similar, with beaklike mouths that have a notch between the lower jaws.

However, when University of Queensland researcher Bryan Fry and colleagues tested the serpentine DNA, the results showed that they were separate species, and not even close relatives, as noted by the publication Asian Scientist.

Considering that these animals are responsible for the majority of deaths caused by sea snakes, it's important to know the identity of the different species. Luckily, however, the antivenin used to treat bites from the Australian and Asian version of this "species" works on both, according to the study.

Both sea snakes feed almost exclusively on spiny catfish and puffer fishes, which requires the snake to open its jaws very wide. The scientists suggest this is one reason for their similar appearance; the notched jaw allows them to swallow these creatures whole.

The researchers have proposed new names for the sea snakes that will better reflect their evolutionary history. The Asian serpent should retain the nameEnhydrina schistosa, they suggest, while the Australian species could be dubbed Enhydrina zweifeli.