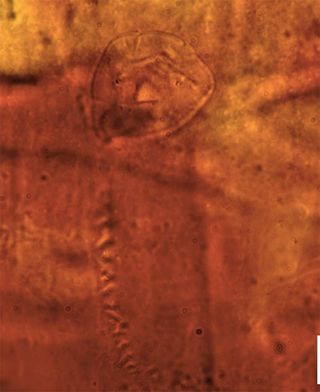 About 200 million years ago, a leech released a slimy mucous cocoon that unwittingly encased and trapped a bizarre animal with a springy tail, preserving it for eternity, or until researchers discovered the teardrop-shape creature in Antarctica recently.
(Image: © Benjamin Bomfleur)

About 200 million years ago, a leech released a slimy mucous cocoon that unwittingly encased and trapped a bizarre animal with a springy tail, preserving it until researchers discovered the teardrop-shaped creature in Antarctica recently.

The cocoon looks like those produced by living leeches, such as the medicinal leech Hirudo medicinalis. Encased inside was a bell animal that looked similar to species in the genus Vorticella; its body extends 25 microns (about the width of some human hairs) with a tightly coiled stalk about twice that long. And like all eurkaryotes, the organism was equipped with a nucleus — in this case, a large horseshoe-shaped nucleus inside the main body. (A micron is one-millionth of a meter.)

This bell animal lived during the Late Triassic Period, when the Earth was much warmer, with dense rain forests flourishing along what is today the Transantarctic Mountain Range where it was found. At the time, Antarctica was part of the supercontinent Gondwana, though it was still located at high latitudes.

Past research has suggested this coiled stalk, which is used to attach to substrates, may be one of the fastest cellular engines known, changing from a telephone wirelike structure to a tight coil at a speed of about 8 centimeters (3.1 inches) per second — the equivalent of a human being walking the across more than three football fields in one second. [See Photos of the Bizarre Vorticella Creature]

Possibly even more amazing is the fact that this soft-bodied, microscopic creature survived the vagaries of time. Preserving a soft-bodied organism like this one for so long is tricky and requires some outside intervention to keep the tissues from degrading. In this case, rather than tree resin (called amber when hardened) that preserved dino DNA in the bellies of amber-trapped mosquitoes in "Jurassic Park," a mucous cocoon did the trick.

"This preservation is quite bizarre, but soft-bodied organisms cannot usually become fossilized unless they are rapidly entombed in a medium that prevents further decay," study researcher and paleobotanist Benjamin Bomfleur, of the Biodiversity Institute at the University of Kansas, told LiveScience.

Here's how the researchers think the hasty preservation took place: "A leech secreted a mucous cocoon that was deposited under water or in wet leaf litter, somewhere in a river system which lay in present-day Antarctica," Bomfleur said. This bell animal must have used its long, rapidly contracting stalk to attach itself to the cocoon soon after, becoming trapped and completely encased by the still-slimy cocoon, which hardened over hours to days.

"The cocoon with the such-enclosed bell animal then was deposited in mud that over time turned into the sedimentary layer where we found it some 200 million years later," Bomfleur explained.

The only other example of this type of preservation comes from a 125-million-year-old cocoon encasing a nematode worm and discovered in Svalbard.

When Bomfleur first noticed the tiny animal in samples he'd collected from Antarctica, he didn't know what he was looking at and didn't have time to consult with an expert in such microfossils, as he was working on his doctoral degree.

"Later this year, however, I finally found the time to look for someone with an expertise on freshwater microorganisms in order to get an expert opinion on the thing," Bomfleur said, adding he contacted Ojvind Moestrup of the University of Copenhagen.

Bomfleur recalled Moestrup looking at the fossil and saying, "It is often very hard or impossible to identify microfossils, but this one was easy. It is the ciliate Vorticella and the helical structure is the stalk."

Bomfleur and his colleagues detailed their research this week in the journal Proceedings of the National Academy of Sciences.