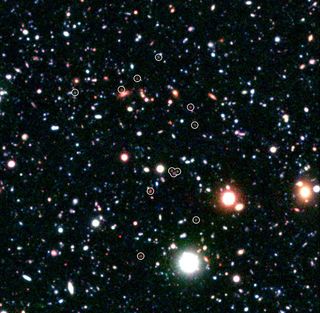 Science vs. religion: Religion proponents say the universe is too finely tuned for life to not involve a god, while science proponents say we know how the universe formed from nothing. Shown here, a group of galaxies forming very early in the universe, about a billion years after the Big Bang.
(Image: © Subaru/ P. Capak (SSC/Caltech))

Three out of five scientists do not believe in God, but two out of five do, said John Donvan, opening a debate on the issue of science and religion yesterday (Dec. 5) in New York.

The discussion pitted the perspectives from both sides against one another: Does science refute religion? Or does science address a different set of questions, with answers that can point toward religious truths?

"Tonight, I want to emphasize that 500 years of science have demonstrated that God, that vague notion, is not likely," said Lawrence Krauss, a theoretical physicist at Arizona State University and one of two debaters arguing that science has rendered religion moot in this Intelligence Squared Debate.

Proponents for religion argue that the universe is finely tuned for life, with certain fundamental parameters in nature that make our existence possible. But Krauss turned this argument on its head.

"We would be surprised to find ourselves in a universe in which we couldn't live," Krauss said. What's more, "most of the universe is rather inhospitable to life."

On the other side, Dinesh D'Souza, an author and former policy analyst, argued that the two — science and religion — are fundamentally separate.

"The questions to which God is the answer are not scientific questions," D'Souza said. Humans around the world want to know why the universe exists, the purpose of our existence and what will come afterward. Science doesn't "have a clue" as to the answers to these questions, D'Souza said.

"Why? Because none of these questions is amenable to being described empirically," he said. "Science can show us how we got a universe, but not why."

The debate, which included an audience vote at the end, focused on a modern, mainstream interpretation of religion and God, rather than a fundamentalist take. So, there was no discussion of creationism or a literal interpretation of Scripture, for example. Both D'Souza and his fellow team member, Ian Hutchinson, a professor of nuclear science and engineering at MIT, acknowledge science as a powerful tool for understanding the world. [Tall Tales? 10 Creation Myths Explained]

Hutchinson pointed out the discussion centered on central tenets of religious faith, not peripheral issues, such as the centuries-old Christian belief that the sun orbited Earth, which science long ago debunked.

Both Hutchinson and D'Souza, who supported the compatibility of science and religion, are Christian, a point their opponents picked up on.

In the last 10,000 years, about 10,000 different religions have featured 1,000 different gods, said Michael Shermer, founding publisher of Skeptic magazine, adding that D'Souza and Hutchinson reject all but one of those gods, bringing them almost in line with atheists, who reject all of them.

"What I am asking you to do is go one god further with us," Shermer said.

But D'Souza and Hutchinson disputed this, saying they did not see other religions as "wrong." All religions can be seen as human enterprises to gain knowledge beyond the empirical, D'Souza said.

When asked about personal religious experiences, Shermer said advancements in neuroscience are showing how changes in the brain create phenomenon responsible for them, such as out-of-body experiences.

“The experiences are real, what we want to know is what do they represent,” Shermer said.

D'Souza responded: If 95 out of 100 people in a village say they know a villager named Bill, the simplest explanation is that Bill exists, he said. Likewise, widespread religious experience is unlikely to be the result of a mass hallucination, he said. [8 Ways Religion Impacts Your Life]

Krauss disagreed: "The fact something may be relatively universal suggests we may be programmed to believe in certain things. That doesn't mean they exist."

Shermer offered an evolutionary theory behind the universal religious impulse among humans. A propensity to make false-positive errors, such as assuming a predator was rustling the grass when it was only the wind, offered a survival advantage; in that way, our ancestors acquired a tendency to infer the existence of intentional forces. As human groups grew larger, religion evolved as a mechanism for social control, a source of morality — one that is no longer needed, he said.

"We know we can do it without God," Shermer said.

D'Souza, meanwhile, maintained that morality is beyond the realm of science, and he referred to theories that purport to explain away religion, as "pop psychology."

"The last good argument against God came out in the 1850s," D'Souza said, referring to Charles Darwin's theory of evolution. (He later said Darwin lost his faith as a result of the death of his daughter, not because of his theory.)

Since then, "Science has made a whole bunch of discoveries, but they point in the opposite direction," D'Souza said.

For example, before the Big Bang theory came about, most scientists believed the universe was eternal, but this theory posited that the universe, as well as space and time, had a beginning.

"This was something the ancient Hebrews had said thousands of years ago," D'Souza said.

Krauss, who has worked in cosmology, had a very different take.

"We have a plausible explanation of how the universe could come from nothing," Krauss said. "Science has taught us we don't need God to exist."

In summation, Hutchinson cautioned that his opponents were overreaching, and in so doing, damaging science. "Talking as if science is all the real knowledge there is alienates people from science who know better," he said, calling this approach "scientism" rather than science.

As science has explained the laws of nature, the gods humans once used to explain the world around us have progressively fallen by the wayside, Krauss said.

"'Why' presupposes purpose, what if there is no purpose? Does there need to be a purpose?" he said.

Audience polls before and after the debate revealed a winning team: Krauss and Shermer, who increased their share of the votes from 37 percent to 50 percent, while D'Souza's and Hutchinson's share increased by 4 percentage points, from 34 percent to 38 percent.